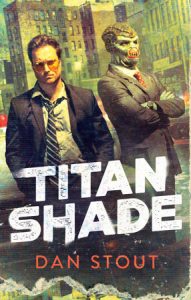 This noir fantasy thriller from a debut author introduces the gritty town of Titanshade, where danger lurks around every corner.

Carter’s a homicide cop in Titanshade, an oil boomtown where 8-tracks are state of the art, disco rules the radio, and all the best sorcerers wear designer labels. It’s also a metropolis teetering on the edge of disaster. As its oil reserves run dry, the city’s future hangs on a possible investment from the reclusive amphibians known as Squibs.

But now negotiations have been derailed by the horrific murder of a Squib diplomat. The pressure’s never been higher to make a quick arrest, even as Carter’s investigation leads him into conflict with the city’s elite. Undermined by corrupt coworkers and falsified evidence, and with a suspect list that includes power-hungry politicians, oil magnates, and mad scientists, Carter must find the killer before the investigation turns into a witch-hunt and those closest to him pay the ultimate price on the filthy streets of Titanshade.

I have to be honest and admit that the only reason I looked into this book at first was because of the way that the awesome cover caught my eye when I was browsing for a new book. It gave me strong urban and noir fantasy vibes the moment I saw it and I knew that I was going to be getting myself a copy to read as soon as I could manage it. I didn’t even read what the story was about before requesting a copy to review for this blog. I’m so glad that I did because Titanshade by Dan Stout was a weirdly fun story full of action and intrigue that I was unable to put down once I picked it up. I usually don’t decide to read a book based off of a cover alone but I’m glad that I did with this one.

In this book, Dan Stout somehow manages to take aspects of urban and noir fantasy and blend them together with some fantasy thriller to create something weirdly unique. One of the things I loved most about this book was how there were times it felt like it was a police procedural show in a fantasy setting, something I don’t think I’ve ever seen done before. I thought the city of Titanshade was well crafted and interesting to read about, full of places and people that were almost too believable for such a setting. I honestly don’t know how I’ve managed to not read anything by Dan Stout before but I’m definitely going to be remedying that in the next few weeks. If his other books are anywhere near as good as Titanshade is then this will be one of my best discoveries of the year.

Looking back at Titanshade a few days after having finished it and I feel like this was a book that shouldn’t have been anywhere near as good as it was. It combines aspects of so many different genres and their various tropes that it should have felt bloated and overdone but it all worked together so well. I don’t know that I’ve ever read something quite like this book before and it’s not often that I get to feel or say something like that anymore. I think that really says something about what a talented author Dan Stout is and is definitely a good enough reason to delve into the rest of his books.

This is a book that I will definitely be recommending to anyone looking for something new and fun to read. I only hope that this isn’t a standalone book and that we get more stories set in or around the city of Titanshade.