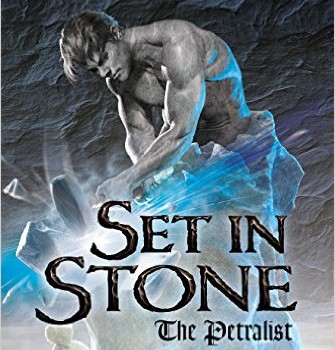 Frank Morin’s Set in Stone is the first book in the Petralist series, a series about people who can access the power in stone to give themselves strength, speed, or even control over the elements. I found this to be a fascinating story set in a very rich world.

Connor is cursed. He’s known it all his life, ever since his parents placed him, as a newborn, in a testing cradle. His parents hid this fact from everyone to keep him from being taken from them, but now, he’s about to turn sixteen, and he can no longer hide. He must gain a patronage or his curse will turn him into a monster. The day before the Sogail, the day he will petition for his patronage, a freak accident involving a flying oven results in him being declared property by the petty leaders of his town. In desperation, he runs away only to be caught by a band of Grandurians, invaders to the land of Obrion. Before long, he finds him self in the middle of his invasion with his town at the center as the Guardians, men and women cursed like him but whose patronage has allowed them to tap the power of stone and gain extraordinary powers, strive to fight off the Grandurians. The Guardians begin to train him, first by accessing the power in granite to give him strength. As time passes, and his power continues to grow, Connor begins to wonder who exactly are the good guys in this conflict.

Set in Stone is a great story with a wondrous magic system reminiscent of Brandon Sanderson’s Mistborn. It begins with immersing you in the world and making you sympathize with Connor’s situation as he struggles to find a way to avoid becoming a monster even as he uses his new found abilities to fight for what he believes is right. Most of the book is set in what basically amounts to a siege. It slumps a little in the beginning as it falls into a pattern of assault, be repelled, assault, be repelled. It doesn’t last very long, though, and the story quickly picks back up. I found the end to be particularly satisfying. Be on the lookout for future volumes of this series.