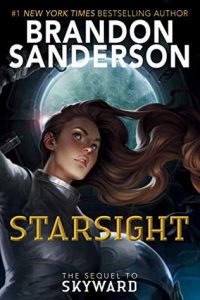 All her life, Spensa has dreamed of becoming a pilot. Of proving she’s a hero like her father. She made it to the sky, but the truths she learned about her father were crushing. The rumors of his cowardice are true–he deserted his flight during battle against the Krell. Worse, though, he turned against his team and attacked them.

Spensa is sure there’s more to the story. And she’s sure that whatever happened to her father in his starship could happen to her. When she made it outside the protective shell of her planet, she heard the stars–and it was terrifying. Everything Spensa has been taught about her world is a lie.

But Spensa also discovered a few other things about herself–and she’ll travel to the end of the galaxy to save humankind if she needs to.

Anyone who knows me or has followed this blog even a little has probably figured out by now what a huge fan I’ve become of Brandon Sanderson’s over the last decade or so. So it shouldn’t be much of a surprise that I was ridiculously excited for this book to come out last month, especially considering the fact that I thought Skyward was one of the best releases of 2018. I made the stupid mistake of starting listening to Starsight when I got the notification from Audible that my pre-order was available for download around 1 AM in the morning when I worked at 8 the next day.

It probably took less than 10 minutes of listening before I was completely sucked into Starsight and pretty much oblivious to what was going on around me in my apartment while I was listening to it. Skyward left me with so many questions last year that I was honestly a bit worried that this book wouldn’t be able to answer them all and that I would have to wait till book 3 to find out everything I wanted to know. Happily, I think Sanderson did a great job answering the majority of the really big questions I had about M-Bot, Doomslug, and Spensa’s powers as Starsights awesome story progressed. Though it did leave me with at least a dozen or two new and even bigger unanswered questions by the end of the book.

The only real issue I had with Starsight was how some of my favorite characters from Skyward were absent for a good chunk of the book. I mean, don’t get me wrong, I love Spensa and couldn’t get enough of her in this book, and the new characters we were introduced to were fun and interesting to read about. I just thought you could really feel the absence of certain characters in this book, though I do understand the reason for their absence and think it’s going to have an interesting impact on the whole series going forward.

Now I think it’s time to talk about what I thought was one of the best parts of both Skyward and Starsight and that is Suzy Jackson’s amazing narration. I think she did an absolutely fantastic job bring this story and all of its characters to life as I listened to it.  I’m always amazed when a narrator can give every character in a book like this their own unique voice and I thought Suzy Jackson managed to pack so much emotion into her narration that you can practically feel everything Spensa and her friends do over the course of the story.  I listen to a lot of audiobooks these days and would say this is one of the best readings I’ve heard in a few years.

I would definitely recommend this book to anyone looking for something fun and new to read, though obviously I would suggest everyone reads Skyward first so they aren’t completely lost. I’m already dreading the wait for the third book in the series and can only hope that it’s no more than a year or two out!