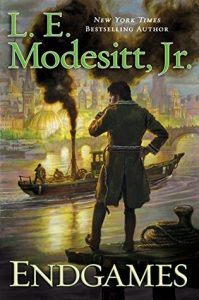 The twelfth novel in L. E. Modesitt, Jr’s, New York Timesbestselling epic fantasy series the Imager Portfolio, and the third book in the story arc that began with Treachery’s Tools and Assassin’s Price.

Solidar is in chaos.

Charyn, the young and untested ruler of Solidar, has survived assassination, and he struggles to gain control of a realm in the grip of social upheaval, war, and rioting. Solidar cannot be allowed to slide into social and political turmoil that will leave the High Holders with their ancient power and privilege, and the common people with nothing.

But the stakes are even higher than he realizes.

I’ve been a huge fan of L.E. Modesitt, Jr’s books ever since I stumbled across The Magic of Recluce at the library back when I was a teenager. While I do enjoy the Saga of Recluce the most, I still enjoy reading  the Imager Portfolio quite a bit because it’s a nice change of pace from Recluce and I’ve always loved the magic system that it has. So I was pretty excited to receive my copy of Endgames in the mail a couple of weeks ago which I promptly sat down and read in a single sitting.

Endgames has proven to be one of those books that has left me struggling to decide and put into words exactly how I felt about it. Now don’t get me wrong, I enjoyed reading the book and thought it has all the trademarks of what makes Modesitt’s books so fun to read. It’s well written and Modesitt clearly put as much thought and detail into this book as he does everything else he writes. For the most part, I found the story interesting and thought it was full of characters that had been fleshed out in great detail. There was just something about it that made me enjoy it less that I expected to and it took me a few days to figure out just what it was.

The main issue I had with this book is that it didn’t quite feel like it was part of the imager Portfolio despite the fact that it obviously took place in the same world as the rest of the books. While Charyn was an interesting character he wasn’t an Imager like I expected him to be and the Imagers weren’t in the book as much as I expected for a series named after them. The Imagers were kind of shoved into the background of the story and felt kind of like they were kind of just tacked on and unnecessary. I’ve always found the magic system in this book weird and interesting so the fact that it was lacking throughout most of the story was just really disappointing to me.

I may not have enjoyed this book as much as I expected or wanted to, I wouldn’t hesitate to recommend it to anyone who is a fan of L.E. Modesitt Jr’s. Though, I would definitely recommend that everyone starts with the first book in the series so they aren’t’ too lost.