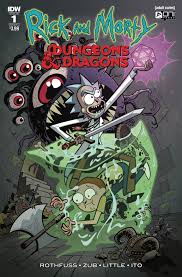 Two pop-culture juggernauts are teaming up and neither multiverse is prepared for what comes next!

When Morty sees a cute girl at school playing Dungeons & Dragons, he asks Rick to show him the ropes, only to discover that his grandfather is a veteran gamer. Next thing he knows, the entire family has been pulled into a campaign that escalates from virtual D&D simulations to alternate universes governed by the rules of the game. And as it turns out, Rick isn’t the only one who knows his way around a d20.

Oh, Rick and Morty. How do I address this mad show and franchise and (often toxic) fandom? To it’s credit, there is nothing quite like it. It scratches an itch you never knew you had. It’s lewd, it’s mean, it’s contemptuous, it’s bitter, it stretches science fiction into intellectual absurdity, and features unabashed debauchery and vice . Like Ernest Hemingway, it gives my heavy drinking credibility. Maybe I don’t drink too much, I’m just a genius. Makes perfect sense. Rick and Morty presents a stark contrast between stupidity and intelligence, young and old, and innocence and depravity. On a level, it is brilliant.

First, let’s address the art. This comic benefits from having a single consistent artist throughout. No frills or excessive stylization. It’s largely faithful to the show, which is fitting. Too much diversion would be a distraction here.

Most of the humor in this comic is not your accustomed Rick and Morty insanity, it presents cheeky allusions to D&D mechanics, lore, and culture. This can be expected since the authors of this comic do not write the show. It’s just not their style. If you know anything about them, you know that they know enough to write the shit out of a D&D comic/story. But, do not expect the lunacy of giant ass bouncing and plummeting into buttholes.

So how well did the authors represent these characters? Do they give them their due? Yes and no. Yes an understanding is apparent. Homework can be seen. Yet the understanding and representation of D&D is infinitely more profound. Again, not a surprise. I do wonder in moments if this comic retains the Rick and Morty brand and could not simply be replaced with any other franchise characters. Could this have been a My Little Pony comic with the exact same story arc (Which, hell yes! Friendship is Chaotic Good!) in the second half of the comic? I think so. The story begins as Rick being more or less Rick, and an accurate representation of his relationship with Morty. And then we get a bread and butter D&D adventure, wherein the characters are no longer themselves, and roleplaying the selves that they desire most in their hearts. So, can this then be both a depiction of DnD as we play and how characters view themselves? Well, read it and decide for yourself. For my part, I wanted just a bit more.

Let’s be clear that this comic is an offshoot of the ongoing principal Rick and Morty comic. I have not read this one, and do not follow it, and I would go so far as to say that a familiarity of the show is not 100% needed (though recommended, of course) for Rick and Morty vs. Dungeons and Dragons. What is necessary is a familiarity with D&D. If you do not have that, skip this. Not worth your $20.

You’ll find more than anything a love letter to D&D. It is delightful, and it inspires a smirk or twenty. If you are a lover of D&D and a bit of absurdity, give it a go.