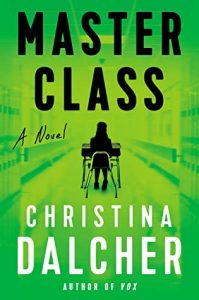 Every child’s potential is regularly determined by a standardized measurement: their quotient (Q). Score high enough, and attend a top tier school with a golden future. Score too low, and it’s off to a federal boarding school with limited prospects afterwards. The purpose? An improved society where education costs drop, teachers focus on the more promising students, and parents are happy.

Elena Fairchild is a teacher at one of the state’s elite schools. When her nine-year-old daughter bombs a monthly test and her Q score drops to a disastrously low level, she is immediately forced to leave her top school for a federal institution hundreds of miles away. As a teacher, Elena thought she understood the tiered educational system, but as a mother whose child is now gone, Elena’s perspective is changed forever. She just wants her daughter back.

And she will do the unthinkable to make it happen.

While I was excited to receive my review copy of this book, I was also a bit hesitant to start reading it right away. I tend to lean pretty heavily towards fantasy, so science fiction or dystopian fiction books like this tend not to do much for me. I’m glad I finally sat down and read it though because I found Master Class by Christina Dalcher to be a complete mind-fuck from beginning to end. It honestly scared me a little bit to read because while I know it’s supposed to be a near-future dystopian story, I found the entire premise behind it to be all too plausible. Which somehow made both easier and harder to sit down and read.

Since I’m normally not a huge fan of the genre, I made the mistake of starting Master Class when I got off work one night, thinking I would be able to read just a few chapters each night until I had finished it, and ended up sitting on the edge of my seat reading all night long and finishing it in a single sitting. Then because I couldn’t stop thinking about it I had to start reading it again a few days later because there was just so much crammed into the story that it was difficult to unpack it all in a single reading. Master Class touches on just about everything you would expect from such a book — classism, racial privilege, and educational bias, and managed to handle it all in a pretty interesting way.

I was not ready for the book to end when and how it did and I’m honestly considering getting the audiobook now just so I can experience the story in a new medium. I know Christina Dalcher had her book Vox come out a few years ago and have it prove to be both popular and controversial and I’m a little disappointed that I did not read it when it first came out. So I’m going to have to remedy that fairly quickly now and order it in the next couple weeks because if it’s anything like Master Class then it is going to be fantastic.

Master Class is a book that I would not hesitate to recommend to anyone looking for something new to read whether they were fans of the genre or not. Christina Dalcher is a fantastic author and this book was worth every moment of sleep I lost while reading it.