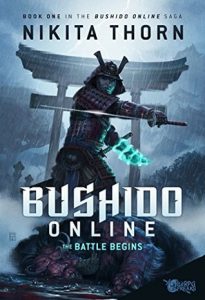 How Often Do You Get a Second Chance in Life?
Seth Kinnaman’s dream has always been to become the best fighter the world has ever seen. After spending his entire life training, he’s finally ready to test his skills in the biggest tournament on Earth where hundreds of the fiercest competitors vie for the supreme title.

In the semi-finals, Seth is getting the upper hand when his opponent uses an illegal blow to take him out. Upon waking up from a coma, Seth finds out he’s lost his sight. He’s become blind and he’s completely devastated. All his dreams are now shattered, and he soon falls into depression. What is he going to do with his life?

That’s when he’s introduced to Bushido Online, a game that promises to keep his skills sharp while he figures out what his next move is going to be. Set in feudal Japan, this VRMMORPG is the land of ninjas and samurai. A world where the most honorable warriors meet the vilest bandits, and where mythical creatures roam free. When he’ll enter that new reality, Seth will discover that while it’s easy to make friends there, one doesn’t have to try very hard to get his fair share of powerful enemies.

Soon, he’s going to have entire clans hunting him down as he struggles to learn the ropes and regain a sense of normalcy. Thankfully, Seth has a few things going for him: his extensive knowledge of combat, and a never-say-die attitude.

“Bushido Online: the Battle Begins” is the first book in the Bushido Online series, a work of litRPG fiction.

As someone who enjoys both reading and playing video games, I love the whole concept behind the LitRPG genre as it would seem to combine two of my favorite hobbies to create something that should just be amazing. Since I’ve never read anything in the genre before though and don’t know any authors I got a list of suggestions from a friend of mine who’s really into them and picked one of his suggestions at random. Unfortunately I struggled to finish Bushido Online: The Battle Begins by Nikita Thorn and I haven’t decided if I’m even going to continue reading the rest of the series.

While I loved the idea behind the plot and found the authors prose in Bushido Online to be surprisingly good I thought the books execution was lacking. I went into this book expecting the story to focus heavily on someone playing a game set in a virtual world but so much of the story was dedicated to the social drama o f online gaming that it really slowed things down and I struggled to get through the first quarter or so of the book. Once I made it past all that to the action and adventure I thought the story was fairly solid, though that only makes me wish more of the book had been like that because I just see a lot of missed potential.

One of the things I did enjoy about this book though was the main character Seth. I thought he was really easy to empathize with and enjoyed the way he used his real world MMA skills to kick ass in what little action scenes we got. Though the majority of the rest of the characters seemed to be cardboard cutouts who I don’t think really added much to the story.

Now, while I may not continue reading this specific series I still really want to enjoy the genre so I’ll be going through my list of suggestions and seeing if there are any other LitRPG books that really stand out to me!