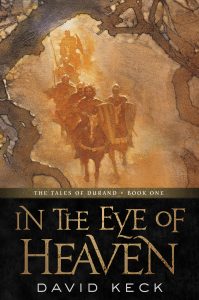 From a strong new voice in epic fantasy comes the tale of Durand, a good squire trying to become a good knight in a harsh and unforgiving world.

Set to inherit the lordship of a small village in his father’s duchy because the knight of that village has been bereaved of his own son, Durand must leave when the son unexpectedly turns up alive.

First he falls in with a band of knights working for a vicious son of a duke and ends up participating in the murder of the duke’s adulterous wife. Fleeing, he comes into the service of a disgraced second son of a duke, Lamoric, who is executing a long subterfuge to try to restore his honor in the eyes of his father, family, and king. By entering tournaments anonymously as “The Red Knight,” Durand will demonstrate his heroism and prowess and be drafted into the honors of the king.

But conspiracies are afoot–dark plots that could break the oaths which bind the kingdom and the duchies together and keep the banished monsters at bay. It may fall to Durand to save the world of Man…

Authentic and spellbinding, In the Eye of Heaven weaves together the gritty authenticity of a Glen Cook with the high-medieval flair epitomized by Gene Wolfe’s The Knight, to begin an epic multi-volume tale that will take the fantasy world by storm.

In The Eye of Heaven is something that has been on my reading list for a few years now that I’ve never seem to found the time to actually read. So when I found out that the last book in the trilogy was going to be releasing later this year and that the first two books were getting reissued in trade paperback I knew it was the perfect time to finally read it. It honestly took me a little while to actually get into the book but once I did I loved almost everything about it and spent my entire day off laying in bed reading it and mentally berating myself for waiting so long to do so.

David Keck is a great author and there was a lot that I enjoyed about this book, but I there were two things that really stood out about if for me. First, In The Eye of Heaven has one of the most realistic and believable worlds I’ve read about in a long time now. I can’t even imagine that amount of time the author had to put into creating to be able to describe in such great detail. Normally I think getting into the grimy details of a world can bog down a story, I think it gives the world some verisimilitude. I didn’t have any problems picturing the world or the people in my mind at all.

The other thing that I think really made this book stand out was what a fantastic protagonist it had. Durand is a good man in a world of corruption and greed who wants nothing more than to be a good knight who can make a difference in that world. I felt like at every turn of the story there was someone or something there to knock Durand on his ass and to get in the way of his goals and every time it happened Durand managed to fight his back back  to his feet and show he won’t be kept down. I think Durand is probably one of the best characters I’ve read about so far this year and if he’s anything like this in the rest of the series then he’s going to easily become one of my all time favorite characters.

The only complaint I really have about In The Eye of Heaven is that I felt like the pacing was a bit off with the story and that the plot would wander off in weird directions occasionally. Things felt a bit dragged out in the beginning and rushed in the end, but happily I don’t think that really affected how much I enjoyed the book. I think the amazing world and its characters more than make up for some minor pacing issues.

This is a book that I will definitely be recommending to anyone looking for a new fantasy series to read. I cant wait to find out what happens next in the series and can’t decide now whether I want to get the ebook or wait for the trade paperback if and when they reissue it.