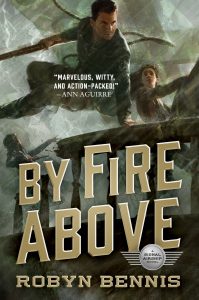 “All’s fair in love and war,” according to airship captain Josette Dupre, until her hometown becomes occupied by the enemy and her mother a prisoner of war. Then it becomes, “Nothing’s fair except bombing those Vins to high hell.”

Before she can rescue her town, however, Josette must maneuver her way through the nest of overstuffed vipers that make up the nation’s military and royal leaders in order to drum up support. The foppish and mostly tolerated crew member Lord Bernat steps in to advise her, along with his very attractive older brother.

Between noble scheming, under-trained recruits, and supply shortages, Josette and the crew of the Mistral figure out a way to return to Durum―only to discover that when the homefront turns into the frontlines, things are more dangerous than they seem.

I don’t even know where to start with this review, I loved The Guns Above last year so I was pretty excited to receive this book in the mail a few weeks ago and was honestly a little surprised by how much it exceeded my expectations. By Fire Above by Robyn Bennis was a fast-paced adventure full of nearly nonstop action and adventure that I was unable to put down once I had started reading. I’m normally not a huge fan of military fiction but this is the second piece of military fiction by Robyn Bennis that I’ve really enjoyed reading.

There was a lot to enjoy in this book but I think the one thing that surpised and pleased me the most was how much the characters have matured and grown in such a short period of time. Josette has really grown into her role as the captain and it’s obvious why the crew of the Mistral trusts here so much and why she was named the first female airship captain in the history of the Air Signal Corp. I think the one character whose growth surprised me the most was Lord Bernat. While he will probably always be a bit foppish and ridiculous, I found him to be a much more likable character this time around and feel like he actually proves his worth in this book.

My favorite book of the The Guns Above was the amazingly detailed airship battles we got and I think I would once again say that that is my favorite part  of this book as well. Robyn Bennis does a fantastic job describing these chaotic and brutal battles with great detail without slowing down the pace of the story at all. I honestly felt like I was sittign on the edge of my seat all night long reading as the story jumped from action to action.

This is definitely a book I would recommend to just about anyone looking for something to read, though I would strongly suggest that everyone reads The Guns Above before reading By Fire Above — it will save everyone a lot of confusion! I already can’t wait for the next book in the series to come out and I can only hope that Robyn Bennis is around for a long time to give us plenty more amazing books to read in the future.