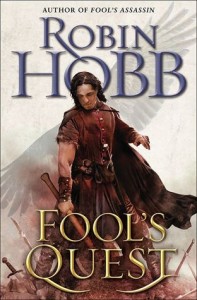 After nearly killing his oldest friend, the Fool, and finding his daughter stolen away by those who were once targeting the Fool, FitzChivarly Farseer is out for blood. And who better to wreak havoc than a highly trained and deadly former royal assassin? Fitz might have let his skills go fallow over his years of peace, but such things, once learned, are not so easily forgotten. And nothing is more dangerous than a man who has nothing left to lose…

I knew before I even received this book that I was going to enjoy reading it. There is no denying the fact that Robin Hobb is an amazing author. What I did not expect was how much I was going to enjoy it, it was so much better than the previous book in the series that you almost couldn’t compare the two. I really enjoyed Fool’s Assassin as well, and all the books in the series that came before it, but I think Assassin’s Quest put them all to shame. Robin Hobb has pulled out all the stops as she heads towards the conclusion of a story that has spanned two decades.

The last thing we see of Fitz in Fool’s Assassin is when he manages to nearly stab the Fool to death thinking he was attacking his daughter. In attempt to save his friend he sends his daughter back to Withywoods with her tutor while he takes the Fool back to Buckkeep in an attempt to get him the Skill healing he needs. When Withywoods is attacked and his daughter Bee is abducted we discover just what Fitzchivalry Farseer is willing to do to locate and save her. There really isn’t much I can say about the plot of Fool’s Quest without spoiling anything, so I will only say this one thing — if you thought you had already seen what Fitzchivalry Farseer was willing to do and what lines he would cross to protect his family, then you are seriously mistaken.

This book managed to take me by surprise many times over, I probably laughed and cried in equal amount the entire way through it. In the few scenes where I wasn’t laughing or crying I was probably clutching the book to my chest and pacing around the room in an attempt to process what I had just read. The only think bad part about Fool’s Quest was that it had to end — I have never wanted a book to be endless so badly before in my life. The wait for the last book in the trilogy is going to be excruciating, the only think that will keep me from going crazy is my soon to start reread of every book in the series and hope I can make it last the year.

I think anyone who is a fan of the series will love this book and I would suggest to anyone who has not read the series to do so. This is the story I have been waiting to read in the 10 years since the release of Fool’s Fate.