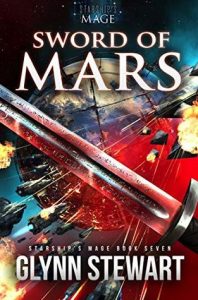 When the star system of Legatus was preparing to secede from the Protectorate of the Mage-King of Mars, it was the secret agents of the Legatan Military Intelligence Directorate that laid the groundwork and fought the covert war to make it happen.

Now, as the open conflict draws to a bloody stalemate, LMID has been broken. Their leader is dead, murdered by agents of the Republic they helped birth. Their surviving agents have scattered, following a final protocol that orders them to defect to the Protectorate.

An old friend brings all of this to Damien Montgomery, First Hand of the Mage-King, and begs for his help in unravelling the mystery. The only answers lie where the Hands of Mars should never go: on the worlds of the Republic.

I’ve been a fan of Glynn Stewarts Starships Mage books ever since I stumbled across them a few years ago, so I was pretty excited when I got an email from Amazon telling me the next book in the series released a couple of weeks ago. I was also lucky in that I had the day off when I found out the book had released so I didn’t have to worry about missing out on any sleep when I sat down and read it in a single sitting. I wanted to love be able to come on here and just fanboy over this book, but while I found that much of Sword of Mars was as fun and full of action and adventure as I’ve come to expect from this series, there were a few things that kept me from loving this book as much as I wanted to.

I love the world that Glynn Stewart has created for us with these books and I always love reading about Damien Montgomery and all of the adventures he has as he does his best to serve the people of the Protectorate.  One of my favorite things about this series has been that we’ve gotten to watch a relatively weak mage go on to become one of the most powerful mages and people un the Universe. In Sword of Mars I think we get yet another example of why Damien is such a great character and we are shown once again why you don’t want to piss him off or make him your enemy when he’s trying to do his job and protect people.

The main issue I have with this book is that I feel like out of everyone in the story we get to spend the least amount of time with Damien. I do like Roslyn as a character but I felt her parts of the story and kind of took away from the importance of what was going on with Damien in the rest of the book. I can’t help but feel like the story would have been better if it had followed Damien for the majority of the book and we had gotten Roslyn’s story as a separate book or novella. People may disagree with me but I personally feel like it would have made for a more tightly focused and better story. As it was it took all I had not to just skim through the parts of the book that didn’t focus on Damien.

That being said, I really loved every moment of Damien’s story and was shocked on more than one occasion by some of the things we learned in this book. I do think that Sword of Mars did a great job answering a lot of the questions I’ve had about the story since the end of Judgement of Mars while leaving enough questions unanswered that I’m eager for the next book in the series. I think the story is going in a really interesting direction and can’t wait to see what comes next in the next book or two.

I may not have loved this book but I still think its a fantastic series and will gladly recommend it to anyone looking for something new to read. Though I would also highly recommend that everyone listens to the audiobooks. I think the narrator does a great job bringing these books to life and I can’t wait till the audiobook for Sword of Mars releases later this year.