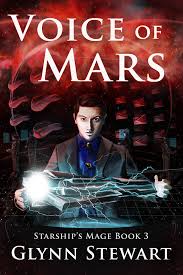 Voice of Mars (Starship’s Mage #3) by Glynn Stewart was a fun and action-packed read from start to finish. Before attempting to write this review  I thought to look back at my reviews of the previous two books of the series to see what I had thought of them then, as I have reread them multiple times since, and I will still stand by my reviews. I still think picking up a copy of Starship’s Mage was one of the better choices I have made when selecting a new book in the last few years. I’ve loved every book in the series so far and Voice of Mars is no exception. In fact, I think this is both my favorite book and the best in the series so far.

I’m probably going to sound like a broken record to anyone who reads my review of the first two books,  but my favorite part of Voice of Mars is probably the characters. Glynn Stewart is a great author who has managed to create a solid cast of characters who I think help make the book something special. Of them all my favorite is still Damien Montgomery. In the previous books Damien is a mage who really isn’t sure of himself or his authority, but in Voice of Mars he has settled well into his role as a hand of the Mage King of Mars and clearly understands just how much power and authority he wields. Add in characters like his bodyguard Amiri, who also tries to play matchmaker for him in this book, and you have something really fun to read.

I still think Jeffrey Kafer is one of the better audio book narrators out there. He continues to do an amazing job narrating this series and still manages to give every new character a unique voice of their own. While still putting enough emotion into his narration that I think you can actually feel the anger or happiness that the characters feel when he narrates them. I don’t think the books would be the same without him.

I would and do recommend this book to just about everyone who is looking for suggestions on new books to read. I think the best thing about this series is that you can recommend it to both hardcore fantasy and science fiction readers alike. If space opera and epic fantasy were to have a secret love child, I think it would be this series. Science fantasy is slowly replacing epic and urban fantasy as my current favorite genre and it’s mostly because of Glynn Stewart and the Starship’s Mage that it has.