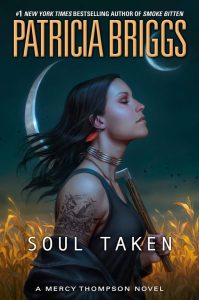 The vampire Wulfe is missing. Since he’s deadly, possibly insane, and his current idea of “fun” is stalking me, some may see it as no great loss. But, warned that his disappearance might bring down the carefully constructed alliances that keep our pack safe, my mate and I must find Wulfe—and hope he’s still alive. As alive as a vampire can be, anyway.

But Wulfe isn’t the only one who has disappeared. And now there are bodies, too. Has the Harvester returned to the Tri-Cities, reaping souls with his cursed sickle? Or is he just a character from a B horror movie and our enemy is someone else?

The farther I follow Wulfe’s trail, the more twisted—and darker—the path becomes. I need to figure out what’s going on before the next body on the ground is mine.

Urban fantasy has probably been my favorite subgenre for a while now and while I normally can’t pick a favorite book or series, it is really easy for me to say that the Mercy Thompson books have been my favorite urban fantasy series for a long time now. Every time I pick up one of these books it’s like I’m returning to one of my favorite places to visit old friends and I felt no different when I started reading Soul Taken. Every time I finish a new Mercy Thompson book I sit there thinking that Patricia Briggs can’t do any better in the next book and then the next comes along and I’m somehow still surprised by how good it is and how much more I enjoyed it over the previous book.

I don’t even know where to start talking about this book because I thought everything about it was just fantastic. The worldbuilding was as amazing as ever, the characters were fantastic as always, and I think the story itself went in some really interesting directions. What I think I loved most about Soul Taken though, is how much backstory on a few of the more inscrutable characters we got. We get some answers to questions I’ve been asking for at least two or three books now and confirmed at least one of my favorite theories about a character.

I can’t even think of anything I disliked about Soul Taken to talk about– I found it to be that good. I honestly can’t wait for the audiobook to release because I want to listen to it so bad right now. I tend to read a bit too fast when I’m enjoying a book as much as I did this one and I’m sure there are things I missed while reading it that I’ll be surprised to hear when I listen to the audiobook. Plus, Lorelai King is an amazing narrator who somehow manages to make every book she reads better.

I would not hesitate to recommend this book to everyone I know, though as it’s the 13th book in the series I would highly recommend that anyone who is just starting the series to begin with Moon Called. Trust me when I say that you don’t want to be missing out on any of the backstories.