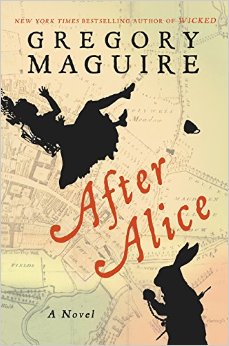 Gregory Maguire has done it again! Just as he did with Wicked, Maguire has turned the beloved children’s tale Alice’s Adventures in Wonderland into an adult world with real problems and real rules yet still full of magnificent possibilities. Maguire’s After Alice is the story of the events that follow Alice’s fateful tumble down the rabbit hole and into the nonsensical world of Wonderland. The novel follows several characters that are all affected by Alice’s disappearance from Oxford and her reappearance into this new whimsical world full of muchnes, suchness, and unusual creatures.

After Alice begins with Ada, a young girl whose only friend just so happens to be the very girl that decided to curiously follow a white rabbit with a waist coat and a pocket watch. Being a portly young girl with a crooked spine and no use for pretend, Ada’s trip into Wonderland simply began as a way to escape her bothersome governess, Miss Armstrong, who has an annoying habit of being highly strung. Once she realizes what Wonderland is, her journey quickly turns into one of a hero’s, where she transforms from a no-nonsense helpless child into more then she and others think her capable of. The ripples of Alice’s curiosity quickly spread to Miss Armstrong, Ada’s worrisome governess, whose fear of termination and thus utter ruin could swiftly become reality. On top of this stress, she must also deal with what struggles come with being a poor unmarried woman in the 1860s. Prospects for a governess were few and far between which meant her fate had already been written so the loss of her position would mean nothing short of damnation.

Another ripple finds its way to Lydia, Alice’s poor mixed up older sister who after the death of their mother must be child and mother all in one breath but with no real place in either direction. Her place in the world is very uncertain as she is expected to act as an adult would with an otherwise very young mind. Her grapple with this only allows her to use childish behavior to deal with the very real adult situations that are placed before her. Alice’s ripples continue to reach one person after another until it finally lands on a young boy from Africa whose life as a protected freed slave has just begun but whose hardships are far from forgotten. For Siam, Wonderland is Heaven itself. It is an escape from the harsh and bitter realities of the American world where a person of color in the 1860s were treated even lower then vermin. Finding a place where he can truly be free from the horrors of slavery gave Siam a new found bravery that allowed him to curiously explore this topsy-turvy world.

Maguire gives a complete picture of the Victorian Era with all of its intricacies, all of its manners, and all of its unfairness. This is truly why I love Maguire’s work. He knows how to combine the harshness of reality while still keeping all the hope and beauty of a childhood tale and in doing so he creates a new reality; a true reality. The black and white outlook on life is just not how the world truly is; it has many different grays. The grays of life that Maguire writes in his work is what makes it real and whole but he is never far from the light at the end of the tunnel. This light is one that can easily be seen in life if one knows where to look. Through all the different grays of After Alice, Maguire’s leaves the reader with an important message about Wonderland; a message that explains the world’s need for Wonderland and for imagination. What exactly that message is…? I guess you’ll have to read to find out. Life will never be the same once you dive into After Alice and come out the other side. Transformation is a real possibility. Wonderland will look different as well as your view on reality.