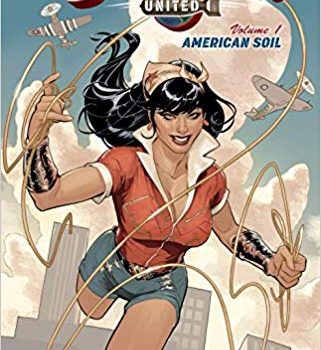 Author Marguerite Bennett (DC BOMBSHELLS, BATWOMAN) unites the women of DC BOMBSHELLS in an alternate history tale with Wonder Woman on the front lines of battle.

The Bombshells are back in an all-new series! As our new tale begins, the year is 1943 during WWII, and Wonder Woman is called to Arizona for help by two young girls named Cassie Sandsmark and Donna Troy! The girls’ friends and families are being displaced from their homes and forced into internment camps! To save them, can Wonder Woman fight against the same people she once fought alongside?

To make matters worse, Clayface has infiltrated the camp and is disguised as loved ones to throw Wonder Woman off. Collects issues #1-6. 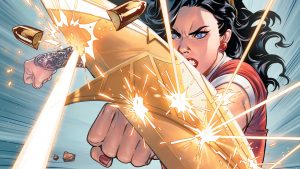 While Bombshells leapt from one arc to another, this story is focused. I found it rather solid and coherent. We follow a single arc: Wonder Woman in the center, and her conflict with the injustices happening in the United States. As a Wonder Woman fangirl, it was exceptionally juicy to see her dropped into the Japanese internment camps fighting for equality for all Americans, no matter what their ethnicity. The internment camps historically are often hushed or ignored, and yet this comic spotlights them front and center. If only America had Wonder Woman then.

However, Wonder Woman enlists help in her heroics. An entourage of brave ladies fight alongside her, and in typical Bombshells fashion, we meet reimagined versions of familiar characters. Yet these operate as an ensemble and carry through their story together rather than disperse into individual arcs. But they do prove themselves heroes in their own right, and not merely minions.

Villains and baddies are also rather concentrated compared to the original Bombshells. We only get a couple and they get much more screen time. This gives them a bit more dialogue and back and forth, and reduces the number of conflicts and possible confusion. The clear trajectory refreshed me a bit here.

I recognize that the focus and linear storytelling may solve some of the problems others would have with Bombshells. This leaves me conflicted. Yes, I trekked through all volumes, read every storyline, and I followed every character, but it took effort in moments. Yet this volume felt like an entirely new series. But to be fair, it is. Oh well, I’m in too deep, I’m along for the ride, and extremely curious of what is to come in volume two. I’m not sure if this series is attempting to be something that can be read without reading the original series, but I strongly recommend reading Bombshells prior to this anyway.

The art for this volume returns to Marguerite Sauvage’s soft, almost sketch-like lines and dramatic coloring. At points, it reminds us of theatre lighting; some characters standby in blue shadows while characters in action move in red. Her art style is distinct and her panels look quite like soft pastel paintings. She draws our ladies with blushed and contoured faces, and she always endows them with pretty pretty eyelashes. However, we only see this in the first few issues. After, the appearance of the comic entirely shifts, and I found this rather jarring. Soft paintings become ultra clean pen work and solid colors. Character expressions alter significantly. Between the artists, backgrounds can be impressionistic or explicit. I personally prefer Sauvage’s work, but experiencing other work has its value.

In spite of its changes, the series maintains its heart and introduces new themes while reinforcing a few of the old ones. I shall not delineate them but I will say they uplift and leave us hopeful. We still have the solid girl power characteristic, a major strength and appeal in this series. But, no gay, I was sorry to see. No sweet lady kisses here. But I’m still hanging in there and have hopes for the next volume.

I recently received the news that Bombshells is in its final arc and has been cancelled. This severely disappoints me, for I have stuck with this story all the way and it brought me joy. I will definitely hold on until the very end. The series brought the DC Universe into my life in a way that no other could. I must cross my fingers that this series stays in print long after its completion so that others may experience this journey. But there is at least one more volume to come. It is not over yet!