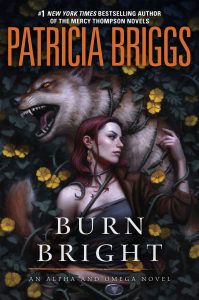 They are the wild and the broken. The werewolves too damaged to live safely among their own kind. For their own good, they have been exiled to the outskirts of Aspen Creek, Montana. Close enough to the Marrok’s pack to have its support; far enough away to not cause any harm.

With their Alpha out of the country, Charles and Anna are on call when an SOS comes in from the fae mate of one such wildling. Heading into the mountainous wilderness, they interrupt the abduction of the wolf–but can’t stop blood from being shed. Now Charles and Anna must use their skills–his as enforcer, hers as peacemaker–to track down the attackers, reopening a painful chapter in the past that springs from the darkest magic of the witchborn…

While I’ve been a huge fan of the Mercy Thompson series by Patricia Briggs for a long time now, I haven’t enjoyed the Alpha and Omega books nearly as much and tend to only read them to keep up with whats goign on elsewhere in the Mercyverse. So I was pleasantly surprised by just how much I loved this book. Burn Bright (Alpha and Omega #5) by Patricia Briggs was a fantastic read that I was unable to put down once I had picked it up and easily one of the best books in both series so far.

I don’t want to spoil the story for anyone so I’m going to keep things fairly vague here and just say that Burn Bright was a fantastic book that answered many of the questions the last few books in the series left me though. Though it also gave me at least a dozen even bigger ones and spawned what is probably a crazy theory that I can’t wait to discuss with other fans of the series. There was just so much that I enjoyed about this series that it’s been a bit of a struggle to actually pick one of two and write this review.

One of the things that surprised me the most about this book and really made it stand apart from all the previous books is how much the story focuses on characters other than Charles and Anna. Now don’t get me wrong, I like Charles and Anna but I think fleshing out the secondary characters and really letting them shine in this book was a great choice big the author. Though I have to admit that by the end of the book I was more than a little irritated with Patricia Briggs. She somehow managed to take characters that I absolutely loathe and humanized them in ways that makes it all but impossible for me to keep on hating them the way that I have,while also taking characters that I adore and showcasing their flaws in some really unflattering and sometimes icky icky ways.

I think everything that happened in Burn Bright is going to lead to some extremely interesting events in the next Alpha and Omega book as well as the Mercy Thompson series. I know the book only just realized today but I’m already dying to read about what happens next and don’t know how I’m going to wait till the next book!

I would definitely recommend this book to just about anyone looking for some fantastic new urban fantasy or paranormal romance to read, though I would also suggest they read all the previous books in this and the Mercy Thompson books first. They are all amazing books worth spending the time and money to read!