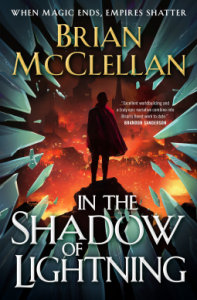 Demir Grappo is an outcast—he fled a life of wealth and power, abandoning his responsibilities as a general, a governor, and a son. Now he will live out his days as a grifter, rootless, and alone. But when his mother is brutally murdered, Demir must return from exile to claim his seat at the head of the family and uncover the truth that got her killed: the very power that keeps civilization turning, godglass, is running out.

Now, Demir must find allies, old friends and rivals alike, confront the powerful guild-families who are only interested in making the most of the scraps left at the table and uncover the invisible hand that threatens the Empire. A war is coming, a war unlike any other. And Demir and his ragtag group of outcasts are the only thing that stands in the way of the end of life as the world knows it.

I’m a fan of Brian McClellan’s and I’ve enjoyed all of his books so far so I was a tad excited when I saw that we were getting a new book series from him. I think his Powder Mage series has one of the most unique magic systems I’ve read about and it quickly became one of my favorite book series. In the Shadow of Lightning was an interesting read that honestly left me with mixed feelings at the end of it. The prologue instantly set a high bar and really sucked me into the story, but I can’t help but feel like the rest of the book didn’t quite hold up to that fantastic opening.

I mean, don’t get me wrong, I enjoyed the book and I thought the magic system in it was great (I’m a sucker for a hard magic system) but at the same time In The Shadow of Lightning just didn’t feel as fast-paced or action-packed as the rest of Brian McClellan’s books. Normally I burn through his books almost faster than I can actually read but this one took me a bit to get through. I even bought the audiobook in case it was just my mood while I was reading that had me feeling like that, but I had the same problems with the audiobook. Though the narrator

Don’t get me wrong, I enjoyed the book and loved the magic system (I’m a sucker for a hard magic system) but In The Shadow of Lightning just didn’t feel as fast-paced or action-packed as the rest of Brian McClellan’s books and it took me a bit longer than expected to get through the book. I even bought the audiobook just in case for some reason it was just my mood while reading it that had me feeling like that, but I had the same problem with the audiobook. Though Damian Lynch did a phenomenal job narrating the book!

I will say that despite it taking me a while to get through the book I found myself picking it back up every time I decided to set it down and take a break for a while. Demir is an awesome protagonist and I really enjoyed the group of people he has helping him in this book. Brian McClellan’s character and worldbuilding were on point as always. I’ll definitely be reading the next book in the series, that’s for sure!