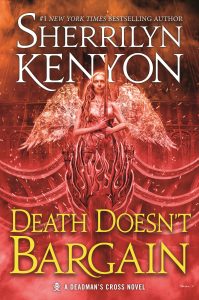 The Deadmen are back…

But so are the demons who have broken free of their eternal prison and are bent on mankind’s destruction. The worst of the lot is Vine, determined to claim their lives for taking hers. She will see the world burn…and has the perfect lure to destroy them all. One of their own.

Kalder Dupree has never known a day of mercy. Born to the cruelest of mer-races, he sacrificed himself for his crew and is in Vine’s hands. He expects no mercy or rescue.

Yet Cameron Jack is determined to set Kalder free. As a Hellchaser, it’s her calling, and she cannot allow even a not-so-innocent to be tortured for an act of kindness that spared her damnation.

To defeat evil, it sometimes takes an even worse evil, and Cameron is willing to do whatever she must to make this right. If Vine thought she had her hands full before, she hasn’t seen anything nearly as powerful as Cameron’s resolve.

Death Doesn’t Bargain by Sherrilyn Kenyon has proven to be another one of those books where I’m still not one hundred percent sure what I thought of it, which has made this review a big tough for me. I haven’t read all of Kenyon’s other books but I think I’ve read a pretty good chunk of them all and I’ve always liked most of them so far. I think one of the best things I can say about Death Doesn’t Bargain is that it has a story that sucked me in from the very beginning and I wasn’t able to put it down.

I think any book that keeps you up late into the night is worth reading and Death Doesn’t Bargain definitely kept me  up until I had finished it.  I think this is a book though, where it’s best to forget about the fact that it’s part of a massive shared universe that spans multiple different series and enjoy it on it’s own. You don’t need to be at all familiar with the authors Darkhunter series, or any of the others that connect to this one to enjoy the story. There isn’t a lot of crossover between this and the other series and I definitely think that is for the best. We are introduced to some great characters in Death Doesn’t Bargain and I really like the fact that they aren’t weighed down by dozens of books worth of drama and relationships like some of the other books I’ve read by the author.

While I may not be one hundred percent sure how I felt about this book overall, I do think it stands on its own much better than Deadmen Walking did. I think I would have been able to read this book without any confusion even if I hadn’t already read the first book in the Dead Man’s Cross series let alone any of the books in the extented universe. When you you consider just how many books share that universe I think that is pretty damn amazing all on its own.

I can at least say that I enjoyed Death Doesn’t Bargain much more than I did Deadmen Walking last year and I’m actually looking forward to seeing what happens with the next book in the series. I would gladly recommend this book to anyone who is a fan of the genre and I think anyone who loves Sherrilyn Kenyon’s other books will love  this one.