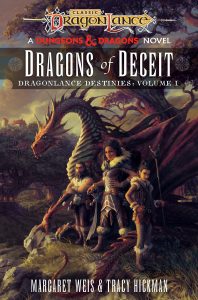 The first new Dragonlance novel from Margaret Weiss and Tracy Hickman in over a decade, and featuring fan-favorite characters from the iconic first two trilogies, Dragonlance Chronicles and Dragonlance Legends–books that brought a generation of readers into the fantasy fold.

Destina Rosethorn–as her name implies–believes herself to be very much a favored child of destiny. But when her father dis in the War of the Lance, her carefully-constructed world comes crashing down. Not only does she lost her beloved father, but the legacy he has left her: a wealthy fiance, and rule over the family lands and castle. With nothing left in the world to support her but wits and determination, she hatches a bold plan: to secure the Device of Time Journeying she read about in one of her father’s books and prevent her father’s death.

The last known holder of the Device was one of the Heroes of the Lance: the free-spirited kender, Tasselhoff Burrfoot. BUt when Destina arrives in Solace–home not only to Tas, but to fellow heroes Caramon and Tika Majere–she sets into motion a chain of events more deadly than she had ever anticipated: one that could change not only her personal history, but the fate of the entire world, allowing a previously-defeated evil to once again gain ascendancy.

God, I can still remember stumbling across Weasel’s Luck by Michael Williams at the bookstore across the street from my house when I was like fourteen years old and developing quite the obsession with the Dragonlance books once I realized how deep the lore of the series was and how many books there were to read. I don’t know that I can properly describe just how much of an impact and influence these books had on me growing up. They’ve influenced how I view things like storytelling, magic systems, worldbuilding, etc. So when I saw that we were going to get the first new Dragonlance novel in over a decade I was ridiculously excited. I probably checked for plot details and a publication date at least once a day.

I was a little worried the new book wouldn’t hold up to the memories I had of the series but I had no reason to worry at all. Dragons of Deceit by Margaret Weis and Tracy Hickman was an amazing return to everything I love about the Dragonlance books. I could not put the book down once I had started reading it and I was so sad when I finished because I knew it was going to be at least a year until the next book in the trilogy is released. I’ve recently bought the audiobook just so I can experience the story again in a new medium and after I finish listening to it I just know I’m going to do a deep dive and start reading the older books again.

One of the things I really loved about this book is that we get to see the War of the Lance from an outside perspective which I think will add an interesting perspective to any rereads I do of the Dragon Chronicles. I also found Destina Rosethorn to be a fantastic character. Someone I think will fit in with the mighty heroes and villains of Krynn very well. Watching her ridiculous interactions with Tasslehoff Burrfoot had me laughing so hard at times I was nearly in tears. I also feel like Dragons of Deceit really leaned into the D&D aspect of things, which I really enjoyed since I feel like some of the last Dragonlance books we got almost forgot they were set in a D&D campaign setting. I got some really good ideas for one of my campaigns while reading this book!

I would honestly rank this up there with the Dragonlance Chronicles Vol 1 or the Dragonlance Legends. I can’t wait for the next book in the trilogy because if it’s anything like the Chronicles or Legends then it is just going to get better with every book!