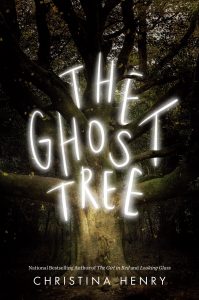 When people go missing in the sleepy town of Smith’s Hollow, the only clue to their fate comes when a teenager starts having terrifying visions, in a chilling horror novel from national bestselling author Christina Henry.

When the bodies of two girls are found torn apart in the town of Smiths Hollow, Lauren is surprised, but she also expects that the police won’t find the killer. After all, the year before her father’s body was found with his heart missing, and since then everyone has moved on. Even her best friend, Miranda, has become more interested in boys than in spending time at the old ghost tree, the way they used to when they were kids.

So when Lauren has a vision of a monster dragging the remains of the girls through the woods, she knows she can’t just do nothing. Not like the rest of her town. But as she draws closer to answers, she realizes that the foundation of her seemingly normal town might be rotten at the center. And that if nobody else stands for the missing, she will.

Horror and thriller books aren’t normally my t thing but there was something about the cover and his book and its synopsis that made me really want to read it, and I’m so glad that I did. The Ghost Tree by Christina Henry was a fantastic read that I could not stop reading once I picked it up. One of the reasons I don’t usually like this types of books or movies is that I’m usually pretty good about predicting the endings, but The Ghost Tree kept me on the edge of my seat all night long as I tried to figure out what was going on and what was going to happen next.

The Ghost Tree was a great book with many things to enjoy about it, but the thing I think I loved the most is that I did not see the ending coming until I was pretty much at the last chapter. I absolutely loved the fact that every time I thought I had the mystery of what was going on figured out the story would take a turn that I just didn’t see coming at all. After I had finished the book everything seemed so logical and obvious but I can assure you that that definitely wasn’t the case while I was reading the book!

One of the things I was a bit worried about when I started reading The Ghost Tree was that as a man in his 30’s I wasn’t going to be able to connect with or understand a protagonist who was a teenage girl, but surprisingly that was not an issue at all.  Lauren was a great character who was questioning and going through things that I think anyone who remembers being a teenager could understand and empathize with. Her character was easily one of the best things about this book.

It may not be a science fiction or fantasy book like I would normally read and review here but The Ghost Tree was an amazing book that I would not hesitate to recommend to anyone looking for something to read.  I think there’s something in it for just about everyone and it’s well worth the read!