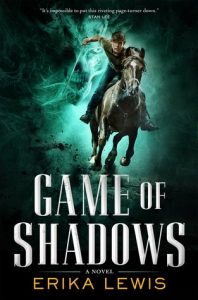 Ethan Makkai thought that seeing ghosts was the worst of his problems. Between his ethereal gift and life with a single mother hell-bent on watching his every move, he feels imprisoned. When Ethan sees a chance to escape, to leave the house by himself for the first time in his life, he seizes it, unaware that this first taste of freedom will cost him everything.

Ethan is thrown into a strange and eerie world, like nothing he’s ever seen. He’s assaulted by dive-bombing birds and rescued by a stranger who claims to be his bodyguard. His apartment is trashed, and his mother is kidnapped to a place Ethan never knew existed—a hidden continent called Tara.

Travelling to Tara in search of his mother, Ethan discovers that everything he knows about his life is a lie. His mother is royalty. His father is not dead. His destiny is likely to get him killed.

Confronted by a vicious sorcerer determined to destroy the Makkai family, Ethan must garner strength from his gift and embrace his destiny if he’s going to save his mother and all the people of Tara, including the beautiful girl he’s fallen for.

I’ve been looking forward to reading Erika Lewis’s Game of Shadows since I stumbled across it on Goodreads a few months ago while looking for something to read and thinking that it sounded pretty interesting. So I was excited when I received a review copy in the mail a few weeks ago, even if it did take me a few days to start reading it. It only took a few chapters before I decided I loved this book, yet by the time I finished it I knew I was going to struggle with reviewing it — there were a few things about it that really bothered me about the book.

I want to make it clear from the very beginning that I did enjoy this book quite a bit. I think Erika Lewis is a fantastic author and I found Game of Shadows to be a well-written and action-packed story that I was unable to put down once I had picked it up. I really enjoyed the characters, which I actually found a bit surprising as I tend to find most YA characters to be a bit annoying and unbelievable. I thought Ethan was one of the more believable teenagers I’d read about in a YA book int he last few months. I thought his reactions to being dragged away from the life he knows and the way he interacts with the new friends he makes and the people of Tara to be perfect. I also loved the fact that Erika Lewis chose to build the world of Tara around Celtic Mythology. I think it’s a mythology that often gets overlooked these days.

Despite enjoying the book as much as I did, there was one thing that really bothered me about it, though I have to be honest and say I can’t decide if it’s something the author did intentionally or if I’m just reading to much into something that isn’t there. I just thought there were too many similarities to some of the more popular YA or middle-grade books out there right now. Ethan being dragged off to a hidden continent by someone claiming to be his grandfather where he meets a sword-wielding cousin he didn’t know about was a little bit too reminiscent of the Alcatraz series for my liking. It also bothered me that the country Ethan was dragged off to was known as Landover, which really put me in mind of Terry Brooks Magic Kingdom of Landover series.

Similarities to other books aside, I did enjoy this book and I will gladly recommend it to anyone looking for a good book to read full of interesting characters and awesome mythology. I will definitely be keeping an eye on Erika Lewis in the future for new books to read.