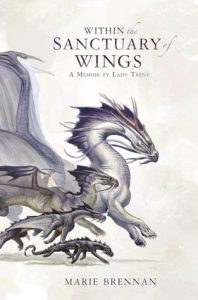 The conclusion to the thrilling memoirs of Lady Isabella Trent and her legacy of dragon evolutionary research and anthropological adventures.

After nearly five decades (and, indeed, the same number of volumes), one might think they were well-acquainted with the Lady Isabella Trent–dragon naturalist, scandalous explorer, and perhaps as infamous for her company and feats of daring as she is famous for her discoveries and additions to the scientific field.

And yet–after her initial adventure in the mountains of Vystrana, and her exploits in the depths of war-torn Eriga, to the high seas aboard The Basilisk, and then to the inhospitable deserts of Akhia–the Lady Trent has captivated hearts along with fierce minds. This concluding volume will finally reveal the truths behind her most notorious adventure–scaling the tallest peak in the world, buried behind the territory of Scirland’s enemies–and what she discovered there, within the Sanctuary of Wings.

The Memoires of Lady Trent has turned into one of my favorite series over the last few years so I was pretty excited when this book released. On its own I think Within the Sanctuary of Wings by Marie Brennan was a fantastic book that I absolutely loved and was unable to put down once I had started reading it. II made the mistake of starting this book late in the evening thinking I would read a couple chapters and then get a few hours of sleep before I had to work the next morning. What actually ended up happening was I read until almost 4 AM and then barely made it to work by 5. Marie Brennan is such a great author and she constantly proves why it’s worth reading everything she writes.

Although sadly I also have to say that when compared to the rest of the books in the Memoires of Lady Trent that Within the Sanctuary of Wings was by far the weakest book in the series. One of my favorite parts of the entire series is all the great characters we get introduced to or see return in every book and the way they interact with Isabella. Unfortunately, we see very little of any of these characters for most of the book and when we do see them it’s only the briefest of glimpses. We also get to see very little of the research and discovery of dragons that made the previous books so fun. Other than the having Isabella as the main character this book doesn’t feel like it fits in the series for a good chunk of the book.

I usually find it hard enough to read and enjoy the last book in a series that vastly different tone of this book made it hard for me to associate it with the Memoires of Lady Trent. Ignore the rest of the series though and this is a great book that I will definitely read more than once. I’m also pretty sad that it’s the end of the series as obsessing over these books has helped pass the time between books for me over the last couple of years. I hope Marie Brennan comes out with a new series for me to follow soon or I don’t know what I’m going to do.

While I would recommend this book to anyone I would definitely suggest that people read the first four books in the series first. They really build upon each other and I think trying to start with the final book in this series would leave people feeling completely lost.