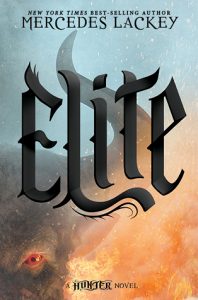 Joy wants nothing more than to live and Hunt in Apex City without a target on her back. But a dangerous new mission assigned by her uncle, the city’s Prefect, may make that impossible.

In addition to her new duties as one of the Elite, Joy is covertly running patrols in the abandoned tunnels and storm sewers under Apex Central. With her large pack of magical hounds, she can fight the monsters breaking through the barriers with the strength of three hunters. Her new assignment takes a dark turn when she finds a body in the sewers: a Psimon with no apparent injury or cause of death.

Reporting the incident makes Joy the uncomfortable object of PsiCorp’s scrutiny—the organization appears more interested in keeping her quiet than investigating. With her old enemy Ace still active in Hunts and the appearance of a Folk Mage who seems to have a particular interest in her, Joy realizes that the Apex conspiracy she uncovered before her Elite trials is anything but gone.

As the body count rises, she has no choice but to seek answers. Joy dives into the mysterious bowels of the city, uncovering secrets with far-reaching consequences for PsiCorp… and all of Apex City.

I was an instant fan of this series from the moment I picked up my copy of Hunter last year. I think it has one the most interesting takes on the Fae out of anything I have read in awhile, so I was looking forward to Elite when it came out earlier this year. Sadly, I didn’t enjoy it anywhere near as much as I did Hunter. I love Mercedes Lackey, she’s always been one of my favorite authors, but I found Elite to be somewhat of a disappointment.

I’m not saying I didn’t enjoy the story — It was action packed with just enough romance in it that once I started it I read it in a single sitting. There were a couple of things that I couldn’t really get past that really drug down my opinion of it. The main issue I had with the book I really can’t get into without spoiling the story for people, so I will only say that there were aspects of the mystery that Joy discovered that didn’t make sense to me. I also thought the book ended way too abruptly and didn’t hook me and leave me dying to know what happens next.

I think my favorite part of the book was actually the narrator and not the story itself. Amy Landon does such an amazing job narrating this series that I think I probably enjoyed Elite more than I would have if I had read it first. She gives every character a unique voice of their own and you can really feel the emotion she puts into every character, especially in the more intense scenes. This is one of the few books I would probably suggest people listen to instead of reading, I personally think it would be better that way.

While I may not have enjoyed Elite as much as I did Hunter, I’m still looking forward to book 3 and I would suggest this series to most people I know. Despite my feelings on this book I still have high hopes for the series in general.