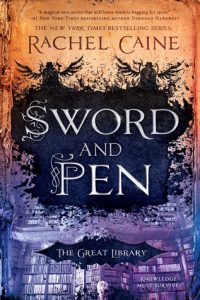 With the future of the Great Library in doubt, the unforgettable characters from Ink and Bone must decide if it’s worth saving in this thrilling adventure in the New York Times bestselling series.

The corrupt leadership of the Great Library has fallen. But with the Archivist plotting his return to power, and the Library under siege from outside empires and kingdoms, its future is uncertain. Jess Brightwell and his friends must come together as never before, to forge a new future for the Great Library . . . or see everything it stood for crumble.

It’s always exciting to get a book in the mail from an author that I’ve never read before, so I was pretty excited when I opened up my door a few weeks ago and this book was sitting there. I thought the plot and premise of the book sounded pretty awesome and couldn’t wait till I had the time to sit down and read it. It didn’t take me long to realize that not only is this the 5th book in a series that I’ve never read but that it was also the last book in that series as well. I was honestly (and understandably IMO) worried about jumping into the last book in a series like this, but I thought Sword and Pen by Rachel Caine was a surprisingly fun and entertaining read considering I’m missing 4 books worth of plot and character building.

This will probably be a fairly short review since I don’t know much about the series or characters except for what was contained in this book and I wouldn’t want to spoil the end of a series for anyone anyway. I will say that I found it surprisingly easy to get sucked into this story as soon as I started reading it. It’s a bit weird stepping into the middle of a war where you don’t know how it started or who started it, but it’s pretty clear from the very beginning just who the good guys and bad guys of this story are.

I would normally be surprised at how detailed and fleshed out all the characters in Sword and Pen are, but since it’s the last book in the series it wouldn’t make sense for it to be any other way. I will say that I’m surprised at how easily it was to fall in love with Jess Brightwell and the other character since I kind of just threw myself into the middle of their story. Like I already said, I didn’t need more than a chapter or two to know that Jess and his friends are clearly the good guys here, as anyone trying to control and censor knowledge like the leaders of the Great Library have been are clearly the bad guys.

I’m honestly a little bit surprised by how much I enjoyed Sword and Pen considering how many books I skipped by reading it first but it was a damn good read and I’m definitely glad that I read it. I also get to go back and read the first four books in the since I know exactly how everything ends, I can take my time and enjoy finding out how everything begins.