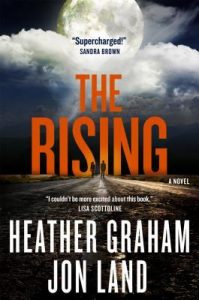 From acclaimed thriller-suspense novelists Heather Graham and Jon Land comes a story of action, mystery, and the endurance of young love.

Twenty-four hours. That’s all it takes for the lives of two young people to be changed forever.

Alex Chin has the world on a plate. A football hero and homecoming king with plenty of scholarship offers, his future looks bright. His tutor, Samantha Dixon, is preparing to graduate high school at the top of her class. She plans to turn her NASA internship into a career. When a football accident lands Alex in the hospital, his world is turned upside down. His doctor is murdered. Then, his parents. Death seems to follow him wherever he goes, and now it’s after him.

Alex flees. He tells Samantha not to follow, but she became involved the moment she walked through his door and found Mr. and Mrs. Chin as they lay dying in their home. She cannot abandon the young man she loves. The two race desperately to stay ahead of Alex’s attackers long enough to figure out why they are hunting him in the first place. The answer lies with a secret buried deep in his past, a secret his parents died to protect. Alex always knew he was adopted, but he never knew the real reason his birth parents abandoned him. He never knew where he truly came from. Until now.

I was actually a little hesitant to review this book, I’ve looked at books by Heather Graham and Jon Land before and I’ve never really found anything that interested me enough to read. I’m more than a little glad though that I gave the book a chance. The Rising was an action packed read from start to finish with a compelling and complex story that kept me reading long into the night. There were enough thrilling and chilling moments that I actually decided to watch something a bit more cheerful on TV before bed after I had finished reading it.

I’m now going to have to at least check out some of their other books because Heather Graham and Jon Land have proven themselves to be fantastic authors capable of enthralling me with their story in the very first chapter. However, The Rising is one of those books where I don’t want to go into too much detail on exactly what I liked about the story or characters as I think that would spoil too much of the book. This is really one of those books where you want to go in blind and enjoy the suspense of trying to guess exactly what’s really going on.

The one thing I do want to talk about is how much I enjoyed how difficult it is to say exactly what genre The Rising fits into. Graham and Land combine elements from horror, science fiction and mystery to create something that I found to be pretty unique. One of my biggest hopes right now is that The Rising is only the first in a series f books that these two authors will collaborate on in the years to come.

As it spans so many different genres I think The Rising has something in it for just about anyone who wants to pick up a copy and I wouldn’t hesitate to recommend it to my friends! It really is a great story that keeps you guessing and on the edge of your seat the entire time.