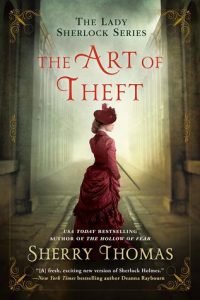 As “Sherlock Holmes, consulting detective,” Charlotte Holmes has solved murders and found missing individuals. But she has never stolen a priceless artwork—or rather, made away with the secrets hidden behind a much-coveted canvas.

But Mrs. Watson is desperate to help her old friend recover those secrets and Charlotte finds herself involved in a fever-paced scheme to infiltrate a glamorous Yuletide ball where the painting is one handshake away from being sold and the secrets a bare breath from exposure.

Her dear friend Lord Ingram, her sister Livia, Livia’s admirer Stephen Marbleton—everyone pitches in to help and everyone has a grand time. But nothing about this adventure is what it seems and disaster is biding time on the grounds of a glittering French chateau, waiting only for Charlotte to make a single mistake…

I don’t know how I keep doing this, but this is the second book in the last month or so that I’ve picked up to read and review only to discover that it is the newest book in a series that I haven’t heard of or read. It didn’t take me long reading it though to decide that I definitely need to go back and read the rest of the books in the series. The Art of Theft by Sherry Thomas was a fun, fast-paced read that I was unable to stop reading once I had started. While I may have been a bit confused at times as to what lead up to the events of this book, it didn’t stop me from enjoying reading it.

This will probably be a bit of a short review as I can’t really talk about how much The Art of Theft improves on the previous book or how the author grows as a writer. I can say though that I had a lot of fun reading this book and I’m glad I decided to read it even after discovering it was the 4th in the series. I’m a huge fan of those old corny heist films from the ’50s and ’60s and I thought Sherry Thomas did a fantastic job of capturing that kind of corny heist vibe and using it to create a fun and well-written story. I made the mistake of starting The Art of Theft right before I would normally lay down to sleep for the night and ended up having to go to work on almost no sleep as I was unable to put it down.

I really enjoyed reading about Holmes and Watson in this book and thought Sherry Thomas’s take on these two iconic characters was both different and interesting. There are so many different Sherlock Holmes stories out there by so many different authors that I thought it was a pleasant surprise to read such a new and refreshing version of their characters. And while I do feel like there wasn’t a lot of character growth or development in this book, I got the feeling that was because it was the fourth such book featuring these characters. I’ll definitely have to go back and read the first three books to find out how these great characters got to where they are now.

As I’ve already said above, The Art of Theft by Sherry Thomas was a fun read and I would not hesitate to recommend it to anyone looking for something new to read. Though I would probably suggest that people read the first book in the series first instead of starting on the fourth as I did.