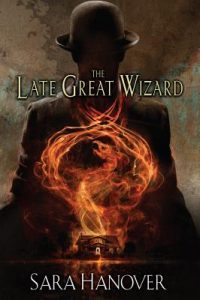 A young woman must work with a magician who is not what he seems to find her father in this new contemporary portal fantasy series.

With her father vanished under suspicious circumstances and her old life destroyed, Tessa Andrews is determined to pick up the pieces and forge ahead. If only their borrowed house didn’t shake and rumble as if haunted. But at least she and her mom have a roof over their heads, so her luck couldn’t be all bad, could it?

As if to prove her wrong, Tessa gets an urgent call for help one night from crusty old Professor Brandard, one of the people on her charity meals route. She dashes over, only to find the house in flames and the professor gone. A handsome young man steps out of the ashes to request her assistance, claiming to be the professor and a Phoenix wizard. She not only has to believe in him, but in magic, for an ancient evil is awakening and it will take the two of them, plus a few shady friends, to stand against it.

Because the rejuvenation ritual has gone horribly wrong. The late, great wizard desperately needs to get his mojo back, for only if Brandard regains all his magic do they stand any chance of defeating this deadliest of perils.

I’ve been a bit burnt out on urban fantasy lately, but I thought this book sounded pretty good when I received it in the mail a few weeks ago and decided it could be worth the read. Discovering new authors and books is always one of the best feelings in the world to me, and I think it’s twice as good when it’s a debut novel like this one is. The Late Great Wizard by Sara Hanover was a fun read full of intense action, a fascinating supernatural world, and one of the more interesting magic systems that I’ve read about in a few years now. I actually had a long list of chores and activities planned out for the day I received this book in the mail but ended up getting nothing done as a spent most of the day lazing about in my recliner and reading.

I honestly wasn’t sure what to expect when I started reading this book, but it only took me a few chapters before I knew that my favorite thing about the book was going to be the protagonist Tessa and the interesting supernatural world she finds herself thrust into. I’ve always thought that the best urban fantasy authors are those who create characters and worlds that feel like they could exist and be easily hidden within our own world. I think Sara Hanover did that with The Late Great Wizard as I felt like I could look up at any time while reading and see Tessa or one of her new preternatural friends.

The other thing that I think really stood out about this book is the way that the main character Tessa knows nothing about the supernatural before she’s suddenly thrust into it. So many books in the genre follow a character who’s already clued in on the supernatural world,  so I thought it was interesting to see how someone would react when they are introduced to such a world. Some people may say that Tessa accepted the existence of magic a little bit too easily, but I can’t help but feel like I and many others would have reacted the exact same way.

One issue I did have with this book though, is how much new information and characters we sometimes got introduced to at one time. It often felt like the author was trying to cram in as many new characters as possible before the end of the book. I honestly felt like it bogged down the story quite a bit for a while before things started to pick back up again as the book spiraled towards its great ending.

Though, all in all, I would say this was a fantastic debut novel by Sara Hanover and I can’t wait to see what happens next in the series. I wouldn’t hesitate to recommend The Late Great Wizard to anyone looking for a new book to read — I think it’s a great addition to the genre!