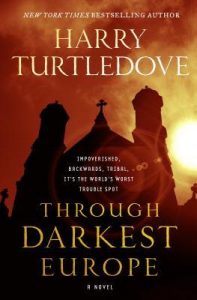 But one region has festered for decades: Europe, whose despots and monarchs can barely contain the simmering anger of their people. From Ireland to Scandinavia, Italy to Spain, European fundemantalists have carried out assassinations, hijackings, and bombings on their own soil and elsewhere. Extremist fundamentalist leaders have begun calling for a “crusade,” an obscure term from the mists of European history.

Now Khalid has been sent to Rome, ground zero of backwater discontent. He and his partner Dawud have been tasked with figuring out how to protect the tinpot Grand Duke, the impoverished Pope, and the overall status quo, before European instability starts overflowing into the First World.

Then the bombs start to go off.

Alternate history is not usually a genre that I read all that often, but every now and then I’m sent or stumble across a book that just sounds far too interesting for me to ignore. Through Darkest Europe by Harry Turtledove was one of those books that I knew I had to read when the chance presented itself to me and it didn’t long at all before I was sucked completely into the story. When I started reading this book I made the foolish mistake of assuming I would be able to read a couple chapters to see what I thought of it before I went to bed that night and then I would just really get into after work the next day. I was not able to put the book down until I finished it and ended up going to work on practically no sleep.

I think one of the main things that made this book so interesting and difficult for me to put down was how different it was from the rest of the (admittedly few) alternate history books I have read. I feel like most of the books in this genre tend to be kind of lazy and just throw in some magic or something like advanced technology and use that as a way to change events. Through Darkest Europe does something I really haven’t seen much of and uses an alternate history for religion to change how historical events unfold. I found the way in which the world changed to be quite interesting in this book.

I found the worldbuilding in this book to be amazingly detailed and it’s pretty easy to see what Harry Turtledove is such a popular author of alternate and historical fiction. I only wish he had done a bit more with the characters in this book. I found them all to be fairly interesting, especially in the beginning but I feel like there wasn’t a lot of character grown over the course of the book. By the end of the last chapter, Khalid and Dawud are pretty much the exact same people they were at the beginning, it’s like everything they witnessed and went through barely had any long-lasting effects on them as people, which was the hardest thing in the book to believe.

That being said, Harry Turtledove is a fantastic author and I’ll definitely be checking out more of his books. I would have no problem recommending this book to anyone looking for something new to read. I would be really curious to see how someone more religious than I am felt about the changes made to Christianity or Islam in this book, I can just see some of the more zealous people I know being a bit upset.