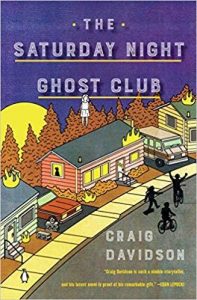 A short, irresistible, and bittersweet coming-of-age story in the vein of “Stranger Things” and “Stand by Me” about a group of misfit kids who spend an unforgettable summer investigating local ghost stories and urban legends.

Growing up in 1980s Niagara Falls–a seedy but magical, slightly haunted place–Jake Baker spends most of his time with his uncle Calvin, a kind but eccentric enthusiast of occult artifacts and conspiracy theories. The summer Jake turns twelve, he befriends a pair of siblings new to town, and so Calvin decides to initiate them all into the “Saturday Night Ghost Club.” But as the summer goes on, what begins as a seemingly lighthearted project may ultimately uncover more than any of its members had imagined. With the alternating warmth and sadness of the best coming-of-age stories, The Saturday Night Ghost Club examines the haunting mutability of memory and storytelling, as well as the experiences that form the people we become.

For the last few weeks, I’ve felt like I’ve been in a bit of a reading rut as I’ve been unable to find any new books that really stood out to me or managed to grab my attention for more than a couple chapters at a time. So when I received an email about reviewing this book from an author I had never heard of and in a genre that is way outside of what I usually review, I figured it wouldn’t hurt to give it a chance. This is definitely a book that I’m glad I decided to read — The Saturday Night Ghost Club by Craig Davidson was a surprisingly deep and insightful book filled with enough suspense and mystery to keep me reading well into the night at a time when I should have been sleeping before work.

One of the things that really stuck out to me when I was reading the cover blurb describing The Saturday Night Ghost Club was how it was compared to both Stranger Things and Stand By Me and I would have to say that if you threw in some Goosebumps as well you would have a fairly accurate comparison. I don’t think I’ve ever read a book that managed to capture that kind of unique 80’s coming-of-age vibe the way that The Saturday Night Ghost Club does. Reading this book really made me wish I had grown up in Niagra Falls along with Jake and his friends and was able to experience this story with them.

I think one of the most interesting things about this book is the way that it is told from the point of view of a single person, but from two different points in time in his life. We get to see Jake the brain surgeon as he makes comparisons between the children he’s operated on and his own past. While in the other I thought Craig Davidson did a fantastic job of putting us into the head of a 12-year-old boy slowly turning into the man he would one day become and just discovering that not everything life is as it seems and that parents often lie to protect their children from the harsh truths of life. I found The Saturday Night Ghost Club to be one of the best and most coming-of-age stories that I’ve read in quite a while.

I think I would recommend this book to anyone looking for something new to read as I think it’s enjoyable no matter what genre of books you usually read. If you’re anything like me you’ll find yourself on the edge of your seat reading this book and unable to put it down until the mystery of The Saturday Night Ghost Club is completely unraveled.