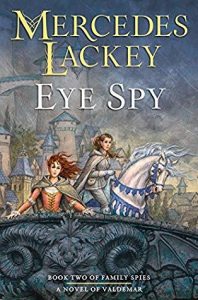 In this second installment of the Family Spies series, set in the bestselling world of Valdemar, the children of Heralds Mags and Amily must follow in their parents’ footsteps to protect the realm.

Mags, Herald Spy of Valdemar, and his wife, Amily, the King’s Own Herald, are happily married with three kids. Their daughter, Abidela, dreams of building upon her parents’ legacy by joining the Artificers, hoping to offset her seeming lack of a Gift.

But when Abi senses the imminent collapse of a bridge only moments before it happens, she saves countless lives, including that of her best friend, Princess Katiana. The experience, though harrowing, uncovers her unique Gift—an ability to sense the physical strains in objects.

Intrigued by the potential of her Gift, the Artificers seek to claim her as their own—but so do the Healers. Through training with both of them, Abi discovers unique facets of her Gift, including a synesthetic connection to objects that allows her to “see” as well as feel the strains.

Her Gift may also grant her a distinct advantage as a spy—there won’t be a building in the entire kingdom of Valdemar with a secret room that she doesn’t know about. With the help of her mentors, she must hone her gift to uncover the hidden secrets in the depths of Valdemar.

As someone who’s been a Mercedes Lackey fan ever since I stumbled across Arrows of the Queen at my local library almost 20 years ago now, so I’m always both excited and nervous when a new book set in her Heralds of Valdemar series releases every year. Excited because it’s always great to be able to immerse myself in this amazing world once more but nervous at the same time because I’m always worried this will finally be the series that really disappoints me. Happily, this book was just about everything I expect out of a new Mercedes Lackey book! Eye Spy by Mercedes Lackey is a fantastically written book full of enough intrigue and action to keep you on the edge of your seat the entire time you read it.

One of the things that had me concerned about this book is that Eye Spy is the 40th Valdemar book and the 10th book following Mags or a member of his family so I was a bit concerned that I would be bored by reading about the same old characters again. Luckily I found Abi to be a great character who was fun to read about and the story didn’t focus on Mags as much as the previous book with her brother did. You would think that after over 40 books set in the same world that Mercedes Lackey would run out of ideas but in Eye Spy, we get to discover a brand new gift I don’t think we’ve ever seen even mentioned before and a look into a group of people other than the Heralds for once. I mean, I love the Heralds but it’s interesting to get to see a story that focuses more on the Artificers and their students than anything else.

I found one of the more interesting aspects of this book to be how we finally get to see exactly how the Kingdom of Valdemar expands by allowing small unaffiliated villages or minor fiefdoms to petition to join the kingdom.  The whole thing tied really well into Abi’s story and her new ability surprisingly well and it will be interesting to see how the events of this book influence the next book in the Family Spies series. I love getting to see a look at Valdemar as it grows into the kingdom we know and love.

The only real issue I had with Eye Spy is the way that it doesn’t quite feel like one cohesive story at times. Don’t get me wrong, I enjoyed the book quite a bit but it often felt like we were getting 3 separate stories that would have almost worked better as a series of novellas or short stories. This is the first time I’ve noticed this issue with one of Mercedes Lackey’s books and I felt like it did detract from the story a bit in that everything felt a bit too rushed at times as problems that arose were solved almost instantly until we reached the final 3rd of the book when the pacing finally seemed to even out.

That being said I still think Eye Spy was a good book and a great addition to the Valdemar series and think anyone who’s a fan of the books will feel the same way. I also think this book stands surprisingly well on its own and can be read without reading anything else in the series so it’s perfect for new readers.