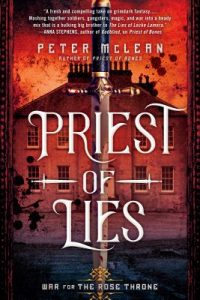 Tomas Piety has been many things: soldier, priest, gangster…and spy. As Tomas’s power grows, the nobility better watch their backs, in this dark and gritty epic fantasy series.

People are weak, and the poorer and more oppressed they are, the weaker they become–until they can’t take it anymore. And when they rise up…may the gods help their oppressors.

When Tomas Piety returned from the war, he just wanted to rebuild his empire of crime with his gang of Pious Men. But his past as a spy for the Queen’s Men drew him back in and brought him more power than he ever imagined.

Now, with half of his city in ashes and the Queen’s Men at his back, the webs of political intrigue stretch out from the capital to pull Tomas in. Dannsburg is calling.

In Dannsburg the nobility fight with words, not blades, but the results are every bit as bloody. In this pit of beasts, Tomas must decide once and for all whether he is truly the people’s champion…or just a priest of lies.

I really loved the first book in this series so I’m a bit surprised that I somehow missed that this sequel was even releasing this year. So I was pretty confused and excited when I had a review copy show up in my mailbox a couple of weeks ago. I usually don’t like books so dark and bloody so I was a bit worried the series wouldn’t be as good as I remember the first book being. Happily, I worried for nothing because I found Priest of Lies to be an action and intrigue-packed read that I was unable to put down once I had picked it up. You would think I would have known better than to start this book late at night but I went to work the next day on no sleep because I couldn’t stop reading.

While I really don’t usually enjoy books that you could consider grimdark there is something about Peter McLean’s writing that manages to suck me into the story and refuses to let me go. I think a large part of it is that while it can be really dark and brutal, Tomas Piety comes across to me as a man who honestly cares about protecting the people and places in his territory. So it was interesting to see just what he would do, or have his gang of thugs and thieves do to protect that territory when a new gang moves into the area and starts threatening their power and authority.

I can also say that the story got a lot more political in Priest of Lies than it did in Priest of Bones, but I think Peter McLean did a fantastic job of balancing out the action and the political intrigue. I was just as interested in the scenes where Tomas is trying to swim move through the political currents and accrue power that way as I was with the brutal and bloody action we got of him and his gang protecting and expanding their territory. I have to admit that I really didn’t like Tomas’s new wife Ailsa in this book and kind of wish she hadn’t been in it as much even knowing that would have changed the entire tone of the book as much of the political aspect of it comes from her family and the people she introduces Tomas to.

While I enjoyed Priest of Lies quite a bit I think I would have to say that I enjoyed Priest of Bones slightly more, though I can’t really put a finger on why. I’m excited to read the next book in the series though because I can’t wait to see what happens with Tomas and his men next. I would gladly recommend this book to anyone looking for something new to read — I enjoyed it enough that I’m getting ready to buy the audiobook soon just so I can experience the story again in a different medium!