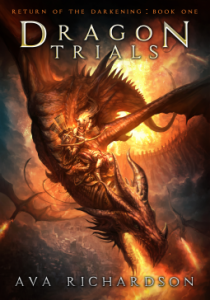 High-born Agathea Flamma intends to bring honor to her family by following in her brothers’ footsteps and taking her rightful place as a Dragon Rider. With her only other option being marriage, Thea will not accept failure. She’s not thrilled at her awkward, scruffy partner, Seb, but their dragon has chosen, and now the unlikely duo must learn to work as a team.

Seventeen-year-old Sebastian has long been ashamed of his drunken father and poor upbringing, but then he’s chosen to train as a Dragon Rider at the prestigious academy. Thrust into a world where he doesn’t fit in, Seb finds a connection with his dragon that is even more powerful than he imagined. Soon, he’s doing all he can to succeed and not embarrass his new partner, Thea.

When Seb hears rumors that an old danger is reemerging, he and Thea begin to investigate. Armed only with their determination and the dragon they both ride, Thea and Seb may be the only defense against the Darkening that threatens to sweep the land. Together, they will have to learn to work together to save their kingdom…or die trying.

Dragon Trials by Ava Richardson was a surprisingly fun book to read, but one that has proven difficult for me to review. I wanted to come on here and rave about how much I enjoyed reading it — which I did, but there was one problem with it that was hard to ignore. Ava Richardson is in desperate need of a good editor. There were enough spelling, punctuation and grammatical errors that I kept finding myself distracted from the story. With a little more editing, however, I think this book could be something special.

All of that aside, I really did love this book. Ava Richardson’s Worldbuilding was perfect, she gave nothing more than was needed to move the story along, but enough to keep me reading because I had to know more. Her characters were fully fleshed and easy to relate to, it was interesting watching them grow closer together as the story progressed. I only wish we had learned a bit more about the history of the dragons themselves, what little was revealed left me wanting more.

While the story itself was a little generic at times, I still found myself flipping through the pages almost faster than I could read them in my need to know what happened next. I even found myself backtracking a few pages when I realized I had read a bit too fast to process what I was reading.

Flaws aside, I know I already can’t wait to read the next book in the series, I can only hope that the wait isn’t too long. Ava Richardson is definitely an author to watch and I know I will be following her releases more closely in the future.