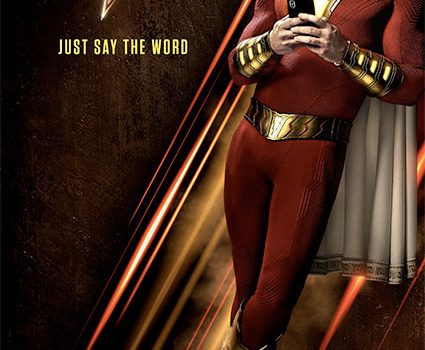 Quick review: This was better than anything before Wonder Woman, but falls short of being in the same caliber as Wonder Woman or Aquaman. This was probably a little more intense than many parents of young children may want to expose their kids to. I think it was a good movie, but in the end, I wouldn’t have paid full price for it. Matinee or Redbox at best. Wait for this one to hit your streaming service.

There was a lot of (playful?) bickering leading up to the release of two movies with the same content. Both were origin stories. Both involved nearly indestructible heroes. Both heroes have the same name.

Yes, Shazam’s name is actually Captain Marvel. The history of this weird exchange of names between the two comic book powerhouses (DC and Marvel) can be read on the internet. As a side note, there were more than two Captain Marvels created around the same time by various comic book publishing houses. The fact is that Captain Marvel/Shazam was first to claim the moniker between the two heroes portrayed this year. Eventually, DC had to relent and stick Shazam in as the hero’s name. And this movie has nothing to do with the Shaquille O’Neal travesty that was Kazaam.

This movie is the story of a magical super hero who transforms from a 14 year old boy into the mythical amalgam, Captain Marvel when he says the name of the wizard who gives Billy Batson his powers. If you watch this movie, and you have no background reading comic books, you may wonder by Superman is wearing a red suit. Strangely enough, there is a legal fight over that in the history of this character, also. It is really surprising this movie was made at all given the legal pedigree that it has. Fortunately, all of that was settled by your grandparents generation.

As origin stories go, it does a good job of creating the background of the character, the purpose the character serves, and the road to becoming the hero. As a morality story, it does a fair job of stressing the point that family is what you make, not where you come from. It has some serious moments that included a couple of jump scenes and some intense monsters action. Those left me with the impression that is not a movie for very young children.

DC took some heavy criticism for making the first movies (Batman trilogy. Superman. Batman versus Superman) too serious, too dark, and not fun enough. Wonder Woman dialed back the dark, but it was still serious enough. Aquaman was fun and dealt with the character seriously. Shazam didn’t feel like it knew how to do either. It was peanut butter and jelly sandwich where the peanut butter and the jelly don’t mesh.

It wasn’t a bad movie. It was fun. It was a good comic book movie compared to some of the junk that has been made. It just wasn’t up to the standard of the best that we have seen lately.