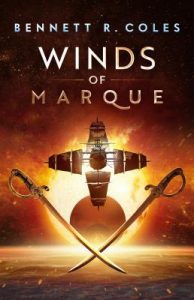 The first novel in an exciting science fiction series—Master and Commander in space—a swashbuckling space adventure in which a crew of misfit individuals in the king’s navy are sent to dismantle a dangerous ring of pirate raiders.

In a dense star cluster, the solar winds blow fiercely. The star sailing ship HMSS Daring is running at full sheet with a letter of marque allowing them to capture enemy vessels involved in illegal trading. Sailing under a false flag to protect the ship and its mission, Daring’s crew must gather intelligence that will lead them to the pirates’ base.

But their mission is threatened from within their own ranks when Daring’s enigmatic captain makes a series of questionable choices, and rumblings of discontent start bubbling up from below decks, putting the crew on edge and destroying morale. On top of it all, Liam and Amelia must grapple with their growing feelings for each other.

Facing danger from unexpected quarters that could steer the expedition off course, Blackwood and Virtue must identify the real enemy threat and discover the truth about their commander—and their mission—before Daring falls prey to the very pirates she’s meant to be tracking.

I was pretty excited to start this book once I had received it in the mail a few weeks ago. While I may not have read anything by Bennet R. Coles before this, I thought the synopsis for this book sounded great and I love this genre. It only took me a little over a day to read through this entire book and I’m happy to be able to say that I found Winds of Marque: Blackwood & Virtue to be a really fun read that I was unable to put down once I had picked it up. I think one of the best things I can say in favor of this book is that I once again started this planning to read a few chapters before going to sleep before reading early into the next morning and getting nearly no sleep before work.

There is a lot to enjoy about this book as Bennett R. Coles is obviously a very talented writer and I think it really shows in this book with his prose and the detailed worldbuilding he had to do for it. The first thing I noticed about Winds of Marque though, is also probably the thing I loved most about the book and that is how detailed and believable I found the militaristic aspect of this book to be. I didn’t even have to look it up to know that Coles had to have some sort of Navy background to be able to write that aspect of this book so well. I think it really makes it stand out when compared to other books I’ve read in the genre.

I also think Coles did a great job getting the science in this book fairly accurate, though there were a few times where creative license was clearly taken to make the story more entertaining. The main issue I had with this book was that I found it a bit difficult to connect with Liam and the rest of the characters in this book because I found them to be so stiff and formal all the time.  That is probably the only downside to this being a book about a Navy crew, as them being so rigid in their militaristic formality kind of dehumanized them a bit for me and made it sort of difficult for me to empathize or connect with them as I would normally do in a book this good. Though I don’t want people to imply that they weren’t well-written and fleshed out characters because they certainly were.

All in all,  I thought this was a really fun book to read and I can’t wait to see what happens in the next book in this series. I enjoyed Winds of Marque: Blackwood & Virtue enough that I’m considering getting the audiobook in the next few days just to experience it in a whole new medium. I would definitely recommend this book to any science fiction or fantasy readers who are looking for something new and fun to read.

I received a free copy of this book.