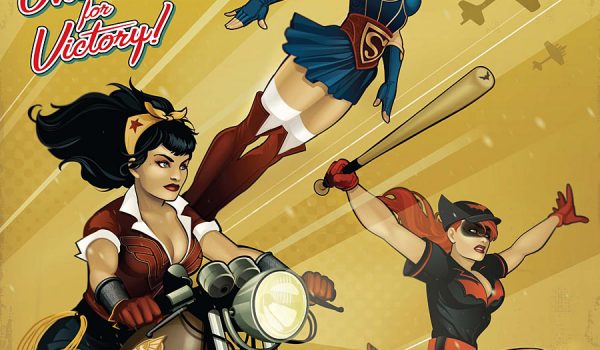 As World War II rages across Europe, the Allied forces issue a call to arms for the greatest heroines the world has ever known. With aid from their allies at home and abroad, these mighty women will turn the tide of war and defend those inviolable rights of Truth, Justice, and Freedom. Together they are: THE BOMBSHELLS!

In 2013, DC Collectibles released their first statue in the Bombshells line: Wonder Woman. She clutches broken chains with a victorious expression, as if to represent triumph over fetters and bondage (if you know anything about Wonder Woman history, you know bondage is a thing). She is sexy, powerful, and symbolic. Tim Miller sculpted a statue inspired by the pin-ups of the 1940s-1950s era and the corresponding ‘can do’ attitude of the time, yet with an added girl-power aesthetic. DC Collectibles regularly releases statues of all our favorite DC ladies in the same style, and the statues became so popular and successful that they demanded a story.

World War II is often a common and fascinating setting, for it presents some of the most extreme conflicts in world history. Fiction aside, it is already a sort of fantastical, tense, dramatic, and tragic place. It has an evil we know was and is real, a blight on our humanity that cannot and should not be forgotten. In this comic series, we revisit the war with all of our favorite DC ladies, fighting for Truth, Justice, and Freedom.

When I say all of our DC ladies, I do mean all of them. From volume one to volume six, we meet character after character for the entire ride. As you can imagine, the comic gets rather crowded. The delight of seeing yet another one of your favorites is met with yet another storyline to follow. The complexity of the story may try patience and demand a bit of commitment, for your favorite storyline or character may disappear for several issues while one or more other story arcs take the stage. And when your storyline does return, you may find yourself flipping back to remember where it left off. However, know that story arcs and characters converge and meet each other; things do come together at appropriate points. The ambition of this comic exchanges focus for an all-inclusive, wild, worldly adventure.

While characters appear and disappear and return throughout the story, they do not suffer from lack of development. Each are represented distinct from one another and as we know them;  the comic leans a bit on familiarity with the character and her history, and yet reinvents her with refreshing creativity. For instance, we meet Supergirl as we know Supergirl, yet she is a Soviet comrade and champion (perhaps a nod to Superman: Red Son?). Supergirl gets her own arc with conflicts and trials she must overcome, and she is not the Supergirl we met in the beginning. The other characters follow this pattern. Though they have their contribution to their Bombshell team, they are given individual attention.

The story presents not only ambitious content and plot, but compelling themes as well. We get much more than a powderpuff action comic. In an effort to avoid spoon-feeding the reader and spoiling the experience, I shall not delineate them here. Read for yourself, and enjoy.

I must mention one of the most satisfying and appealing features of this comic that I know draws many folks to it: it is queer AF. Have you been dying to see your OTP DC girls? It could be in here. Even the ‘straight’ girls are…ehh probably not really straight. Would you like lovely giant panels of superhero lady on lady kisses? It’s here. And it is so freakin’ adorable.

They are lovely and drawn beautifully throughout. The character design is the soul of this comic. The DC ladies are sexy, expressive, and cute, bereft of objectification or exploitation.  The comic maintains the pin-up style and the integrity of the characters, even in the hands of different artists (I only found a page or two in volume five that had a bit of a jarring change in character appearance). For me this is a rather commendable collaboration. The different pens are visible, but only with a measure of scrutiny, and they don’t pull us out of the story. The art transports us from the paradise of Themyscira to the depths of Atlantis to the wild Zambesi to the slums of Gotham city and beyond; each place has its own tone and spirit. We get a few fairy tale/folk myth flashbacks illustrated in storybook fashion, a pleasurable contrast amidst the intense action and drama. While battle scenes are detailed, and we do see our share of death, panels are not explicit or graphic. In other words, no gratuitous gore.

This comic is a triumph for women creators, and for myself it is a resounding success. While it is certainly not an infallible or flawless work, I must acknowledge its exceptional creativity and ambition. Above all, it was fun. And I want more.