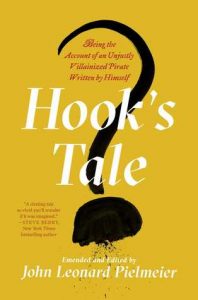 A rollicking debut novel from award-winning playwright and screenwriter John Pielmeier reimagines the childhood of the much maligned Captain Hook: his quest for buried treasure, his friendship with Peter Pan, and the story behind the swashbuckling world of Neverland.

Long defamed as a vicious pirate, Captain James Cook (a.k.a Hook) was in fact a dazzling wordsmith who left behind a vibrant, wildly entertaining, and entirely truthful memoir. His chronicle offers a counter narrative to the works of J.M. Barrie, a “dour Scotsman” whose spurious accounts got it all wrong. Now, award-winning playwright John Pielmeier is proud to present this crucial historic artifact in its entirety for the first time.

Cook’s story begins in London, where he lives with his widowed mother. At thirteen, he runs away from home, but is kidnapped and pressed into naval service as an unlikely cabin boy. Soon he discovers a treasure map that leads to a mysterious archipelago called the “Never-Isles” from which there appears to be no escape. In the course of his adventures he meets the pirates Smee and Starkey, falls in love with the enchanting Tiger Lily, adopts an oddly affectionate crocodile, and befriends a charming boy named Peter—who teaches him to fly. He battles monsters, fights in mutinies, swims with mermaids, and eventually learns both the sad and terrible tale of his mother’s life and the true story of his father’s disappearance.

Like Gregory Maguire’s Wicked, Hook’s Tale offers a radical new version of a classic story, bringing readers into a much richer, darker, and enchanting version of Neverland than ever before. The characters that our hero meets—including the terrible Doctor Uriah Slinque and a little girl named Wendy—lead him to the most difficult decision of his life: whether to submit to the temptation of eternal youth, or to embrace the responsibilities of maturity and the inevitability of his own mortality. His choice, like his story, is not what you might expect.

I can still remember the first time I sat down with my parents and watched the 1960 version of Peter Pan starring Mary Martin when I was a kid and falling in love with the story of Peter Pan. Since then one of my favorite things to do has been to read different versions of Peter Pan and see which authors I think do the best job. So I was pretty excited when this book showed up on my suggested reading list a few weeks ago. Who wouldn’t want to read one of their favorite childhood stories told from the point of view of the antagonist?

Sadly I have to say that Hook’s Tale wasn’t what I expected and I was a little disappointed in how much I struggled to actually get into the book. It’s not that it was a bad book or anything, it was actually a well written and fast-paced story once I finally got into it. I just wasn’t a fan of the authors take on the characters of Peter Pan, Hook, or Tiger Lily or of how much the story focused on a love story between Hook and Tiger Lily. As much as I struggle to get into this book in the beginning I did finally get sucked into the story at about half way point and was unable to put it down till I had finished it.

While I may not have enjoyed this book as much as I had thought I would I’m still glad I finished it and I’ll definitely be checking out any sequels that come out in the future. I would recommend this book to anyone who is a fan of Peter Pan or books like Wicked where the supposed villain gets to tell their side of the story. as I wanted to I still ended up enjoying it in the end and I would think that fan’s of books like Wicked will definitely enjoy reading this.