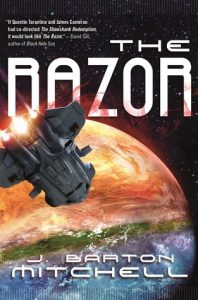 J. Barton Mitchell’s The Razor is a riveting science fiction thriller about a man struggling to survive the chaos on a prison planet.

Brilliant engineer Marcus Flynn has been sentenced to 11-H37 alongside the galaxy’s most dangerous criminals. A hard labor prison planet better known as the Razor, where life expectancy is short and all roads are dead ends.

At least until the Lost Prophet goes active…

In a few hours, prison guards and staff are evacuated, the prisoners are left to die, and dark mysteries begin to surface.

Only Flynn has the skills and knowledge to unravel them, but he will have to rely on the most unlikely of allies–killers, assassins, pirates and smugglers. If they can survive each other they just might survive the Razor…and claim it for their own.

This was one of those books where I wasn’t sure what to expect when I started reading it. I’m not that big of a fan of science fiction so I don’t read much in the genre, but this book sounded too good to pass up when I received it in the mail. Happily, The Razor by J. Barton Mitchell was a fun read full of suspense and some intense edge of your seat action that actually had me putting down the book momentarily so I could pace around the room to calm my nerves a bit before diving back in. I made the mistake of starting this book around right before bed thinking I would read a chapter or two and put it down but I kept telling myself one more chapter until it was finished.

I loved the whole ‘prison planet’ concept of this book because it just seems like something we would actually do once we had started colonizing or mining new worlds, especially when we found planets as dangerous as 11-H37 is. So not only does the story start off on a great concept, but it only gets better when all the guards and staff are evacuated and we get to see the prisoners left to try and somehow survive on their own. It honestly sounds a bit ridiculous when I think about it, but J. Barton Mitchell is a great author and he really makes the story work.

I do have to say though, that while I think the writing and plot of The Razor is superb, I found it to be a little weak in the character department. Don’t get me wrong, I enjoyed Marcus Flynn as a character and didn’t have any problems connecting with him or his unexpected partner and rooting for their survival, but I just didn’t enjoy any of the other characters all that much. I know that they are all convicts and we probably aren’t meant to like them much, but I just didn’t care what happened to them one way or another.

Though, all in all, I would say that I enjoyed this book a lot and wouldn’t hesitate to recommend it to anyone looking for something new to read. I know I’ll definitely be reading any follow up books that J. Barton Mitchell writes and probably checking out the other Sci-Fi series that I know he writes.

I received a free copy of this book in exchange for a review.