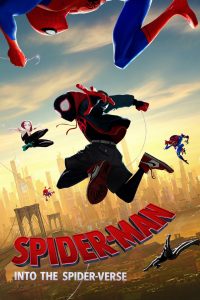 Quick review: Worth the full price admission. I took a very powerful parenting message away from the movie. It wasn’t MY Spider-Man in character or style. It is appropriate for younger ages, mostly.

When the news of a feature-length Spider-Man film crossed my attention, I was thinking it was another Disney channel crossover series. I didn’t pay that much attention to it. Then my boys started talking about it coming to theaters. I wasn’t that interested in seeing it. T’is the season of Aquaman and Mary Poppins. One more movie was not what I needed to draining my bank account to see. Then the reviews from people I respect started popping up. I ignore Rotten Tomatoes for the  most part. I shun critic reviews until after I see a film. People who are comic book and comic book fans started providing very positive feedback. Those comments piqued my curiosity.

From the beginning, I knew it was going to be stylistically different from my taste. There were moments that the reminded me of a comic book movie that lifted straight off the pages. At other times, I got the impression of the influence of Genndy Tartakovsky. As far as storytelling, there was a lot more influence of the recent style of Disney than Marvel. It exhibits the comedic splat-falls and onomatopoeia of more campy portrayals of comic book heroes. True, that style has been part of comic books portraying what is happening, but in a media where video and audio are the driving communicators, it can be overdone. Unless you are watching Adam West Batman episodes.

This is my biggest hangup with the movie. It isn’t my style of comic movie. To be fair and transparent, my favorite styles are the Spider-Man and Batman animated adventures of the ‘90’s. I felt those captured the essence of how comic books were done. They used the audio and visual medium to tell the story in a serious way, but still fun to watch. In the Spider-Verse seemed to be produced for the post-literate age we are moving through. It moved fast. The graphics were flashy. The audio and the visual shifts were sometimes sudden and a bit shocking to the senses.

My second biggest hangup with the movie is that this was not about my Spider-Man. I am totally behind the Miles Morales character. I think it brings a fresh approach to the story. I can see using this character to bring new depth to a story world that has been around since the 1960’s. The portrayal of Miles Morales from the movie is good acting, good writing for that character, and good character development. He becomes the center of the story, and deserves it.

I love Peter Parker. He was one of the heroes of my youth. Growing up as a nerd I identified with Peter. I know that Peter has to step aside to allow Miles to fulfill his role and destiny. That doesn’t mean I will be able to identify with that character. My oldest son loved this movie because it allowed Miles to come to the forefront. I didn’t love it because Peter slid into the shadow.

This may be just a bit of “get off my comic book lawn” grumpy old fart-ism coming out. I feel I have earned some of that. I won’t sit here and rip this movie apart, though, just because I feel slighted. It was a good movie. It did tell a very good story of a young hero fulfilling his role as the protector of his city. It gave younger comic fans a chance to own a character that I have loved since I was a youth, only in a different way.

The one big thing I took away from the movie was a parenting moment. Miles’ dad struggles to be a “good dad”. He doesn’t get his son or his culture. He struggles to communicate with Miles, and leaves the relationship building to his brother, who is more in tune with the youth. There is one scene where Miles’ dad, speaking through a door, taught me something about parenting my boys. He acknowledges the talent and skills that Miles possesses, even if he doesn’t totally understand them. Then he says, “I see the spark in you. It’s amazing. Whatever you choose to do, you’ll be great.”  That was what I wanted my boys to hear their whole lives. I realized I was just as bad at communicating it to them as Jefferson had been about saying it to Miles.

I didn’t miss the chance to tell my boys in our post-movie breakdown what I thought. I told them that the things that I had pushed them to do, challenged them to pursue, was about seeing a spark in themselves they couldn’t see. I told them that they were free to be who and what they wanted to be and I would always love them. As long as they were true to the spark that was within them, I would always support and encourage them, even if I didn’t completely understand. The grumpy old-fart can still be taught a few things by a different approach to telling a story.

Finally, this is a movie that I think is best for older children. There is some intense fight scenes. There is a death scene that is somewhat violent. There are some bigger ideas of cross-dimensional, quantum theory, multi-verse entanglement that may confuse younger kids. Mostly because they will want to know why there are different Spider-Men/Women/Pigs. There may have been some more adult language. I don’t remember anything obviously offensive, but if you are more sensitive to language than I am, it may be possible.

It is a good comic book movie. It is a great Spider-Man story. If you are an old-fashioned Spidey fan like me, loosen your belt and relax a bit before going in. Enjoy the ride. It is worth it.

Postscript: I can’t leave this without sharing the tribute at the end of the credits:
“That person who helps others simply because it should or must be done, and because it is the right thing to do, is indeed, without a doubt, a real superhero,” – Stan “The Man” Lee.