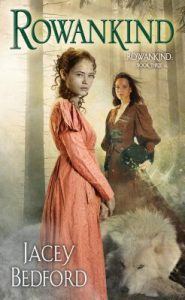 The third book of the swashbuckling Rowankind trilogy follows privateer and witch Ross Tremayne as she navigates the magical world of alternate 19th-century Britain.

What do you do with a feral wolf shapechanger who won’t face up to his responsibilities? How do you contain magical creatures accidentally loosed into Britain’s countryside? How do you convince a crew of barely-reformed pirates to go straight when there’s smuggling to be done? How do you find a lost notebook full of deadly spells while keeping out of the clutches of its former owner? How do you mediate between a mad king and the seven lords of the Fae?

Ross and Corwen, she a witch and he a shapechanger, have several problems to solve but they all add up to the same thing. How do you make Britain safe for magic users?

It’s 1802. A tenuous peace with France is making everyone jumpy. The Fae, and therefore Ross and Corwen at their behest, have unfinished business with Mad King George, who may not be as mad as everyone thinks–or if he is, he’s mad in a magical way. The Fae have left mankind alone up to now because they don’t care to get involved with mortals, but don’t be fooled into thinking they’re harmless.

Rowankind by Jacey Bedford was a fun read full of interesting characters and an intriguing plot concept that I would like to see become more popular. I thought I had read the first two books in this series before starting this one but it quickly became apparent that I somehow managed to miss the second book, so it took me a couple chapters to catch up with what was going on and to really get into the story. Luckily Rowankind does a good job explaining past events well enough that you don’t need to have a deep knowledge of the first two books to really enjoy this one.

I’m a huge fan of urban fantasy so I’m used to reading about worlds where magic is slowly returning or the supernatural world has always been hiding in plain sight. So I really enjoyed how Jacey Bedford took that concept and put an interesting twist on the story by having it set hundreds of years in the past instead of the present day. I think one of the best parts about Rowankind is how the author manages to craft a believable alternate history using magic and supernatural creatures. It’s interesting to see how history may have unfolded had we had magic and supernatural creatures like werewolves or the Fae openly trying to influence events.

While I’m still going to have to read Silverwolf to see how it compares to Rowankind, but  I’m really impressed by how much Jacey Bedford has improved as a writer since Winterwood released in 2016. That’s not to say that I thought Winterwood was a poor book, because I enjoyed it a lot, I just think Bedford’s prose and dialogue have improved an impressive amount in just two short years. My main complaint about this book is that it lost the swashbuckling, adventurous feeling the first book had. Instead, the story seems a bit more politically and romance driven than I personally liked.

All in all, though, I found Rowankind to be a fun read that I will happily recommend to anyone looking to read some good urban fantasyesque alternate history. You definitely won’t regret digging into this series!