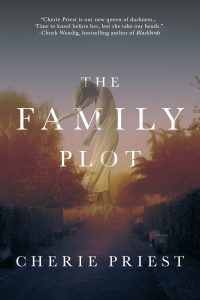 Chuck Dutton built Music City Salvage with patience and expertise, stripping historic properties and reselling their bones. Inventory is running low, so he’s thrilled when Augusta Withrow appears in his office offering salvage rights to her entire property. This could be a gold mine, so he assigns his daughter Dahlia to personally oversee the project.

The crew finds a handful of surprises right away. Firstly, the place is in unexpectedly good shape. And then there’s the cemetery, about thirty fallen and overgrown graves dating to the early 1900s, Augusta insists that the cemetery is just a fake, a Halloween prank, so the city gives the go-ahead, the bulldozer revs up, and it turns up human remains. Augusta says she doesn’t know whose body it is or how many others might be present and refuses to answer any more questions. Then she stops answering the phone.

But Dahlia’s concerns about the corpse and Augusta’s disappearance are overshadowed when she begins to realize that she and her crew are not alone, and they’re not welcome at the Withrow estate. They have no idea how much danger they’re in, but they’re starting to get an idea. On the crew’s third night in the house, a storm shuts down the only road to the property. The power goes out. Cell signals are iffy. There’s nowhere to go and no one Dahlia can call for help, even if anyone would believe that she and her crew are being stalked by a murderous phantom. Something at the Withrow mansion is angry and lost, and this is its last chance to raise hell before the house is gone forever. And it seems to be seeking permanent company.

THE FAMILY PLOT is a haunted house story for the ages-atmospheric, scary, and strange, with a modern gothic sensibility to keep it fresh and interesting-from Cherie Priest, a modern master of supernatural fiction.

I wasn’t really sure what I was getting into when I asked for a copy of this book to read, I had never read anything by Cherie Priest and I decided before I even received it that I would go into the story blind. I barely even looked at the cover before I started reading it, I really wanted to go in with no expectations at all. I almost wish I hadn’t done that because while I enjoyed the book a great deal I didn’t start reading it till after midnight and I didn’t realize the story would scare the crap out of me.

I don’t usually get scared while reading books, I’ve never had any issues reading Stephen King books for example, but when I stopped reading The Family Plot for the night I decided to watch some late night cartoons before I went to sleep. It really didn’t help, I still woke up from a nightmare in the middle of the night. The fact that I had that sort of reaction to a book amazes me and I think is one of the many examples of why I enjoyed reading it so much.

I thought The Family Plot was extremely well written with the story paced perfectly — I was on the edge of my seat the majority of the night wondering what was going to happen next. There was also a great cast of characters that I’ve been unable to get out of my head over the last couple days. If the rest of her books are as good as this one I think I have a new author to binge read over the next couple weeks as I find something new to read.

I don’t think I could recommend this book enough, and I will definitely be adding it the list of book suggestions I have for when someone is looking for something new to read. I thought The Family Plot really stood well on its own, but I still hope it ends up being a series, I would love to read more about the characters. I will definitely be keeping my eye out for more.

Tor Books has been kind enough to offer up two copies of this book for any readers in the US and Canada so enter below for a chance to win!