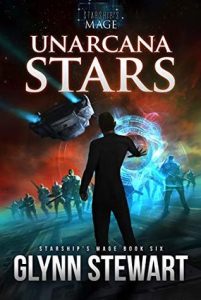 It has been over a year since the UnArcana Worlds of the Protectorate of the Mage-King of Mars seceded, shattering the unity of the human race. The new Republic of Faith and Reason has raised new banners in defiance of the power of the Protectorate’s Mage aristocracy.

Now, Hand Damien Montgomery commands a relief mission to a Republic world ravaged by famine. His humanitarian mission collides with a newborn military beginning to flex its muscles–and a newborn nation prepared to accept no violations of its sovereignty, regardless of their needs.

Elsewhere, disaster strikes the Nia Kriti Fleet Base as an earthquake shatters their only communication with the rest of the Protectorate. Officer-in-training Roslyn Chambers is in the middle of the recovery effort when she realizes Nia Kriti is under attack.

The Republic is done with peace. They are coming for the Protectorate–and they will see the fleets of Mars break!

While I was excited to see this book released earlier this month I was really hesitant to actually pick it up and read it. I’ve been a fan of Glynn Stewarts Starships Mage books since I stumbled across them on Amazon years ago but I didn’t really enjoy the Red Falcon spinoff trilogy he wrote and was a bit worried that was going to continue with this new follow-up series. Happily, that was not the case and I can say that UnArcana Stars was a fun and action-packed read that I was unable to put down once I had started reading it.

UnArcana Stars may feature an ensemble cast of characters with numerous viewpoints, I was happy to see that Damien Montgomery took center stage for a good chunk of the book. While the ending of Judgement Of Mars may not have been a complete cliffhanger it did leave me with many questions and concerns so I was happy to see that they would finally start getting addressed. Damien Montgomery is also just one of my all time favorite characters and the main reason why I enjoy this series as much as I do.

That’s not to say that there was anything wrong with the rest of the characters. I don’t think there was a single viewpoint I disliked in this entire book and the story itself was fantastic. We finally get to see what it means for a Hand to go to war and it is epic. I almost feel bad for the Republic by the end of UnArcana Stars.

The only real issue I had with this book was how much time was spent describing the various weapons and ammunition of every ship that makes an appearance. I know this is supposed to be a story about starships going to war but it honestly felt a bit too much like gun porn at times to me and I had to just skim over some of the descriptions. The detail of the battles was excellent but I could have done without a recap of every ships weapon capacity every few chapters. There were also a few minor story details that bothered me that I can’t go into without spoiling parts of the story, which I won’t do.

All in all though, I thought this was a well-written book with a great story and some really fantastic characters that I would highly recommend to anyone looking for something new to read. Though, I would recommend that anyone who hasn’t done so start with the first book in the series or they will be completely lost. I’ll definitely be rereading this book and I’m eagerly waiting for the audiobook to be available to that I can listen to the entire series again from the beginning.

All in all, I thought this was a well-written book with a great story and some fantastic characters that I would recommend to anyone looking for something new to read. Though I would really recommend that any new readers looking at this start with the first book in the series so they aren’t completely lost. I’ll definitely be reading this book again and I’m eagerly waiting for the audiobook to be available so I can add it to my collection.