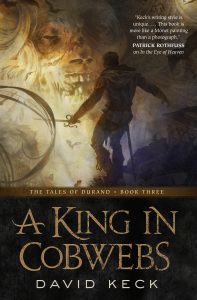 Once a landless second son, Durand has sold his sword to both vicious and noble men and been party to appalling acts of murder as well as self-sacrificing heroism. Now the champion of the Duke of Gireth, Durand’s past has caught up with him.

The land is at the mercy of a paranoid king who has become unfit to rule. As rebellion sparks in a conquered duchy, the final bond holding back the Banished break, unleashing their nightmarish evil on the innocents of the kingdom.

In his final battle against the Banished, Durand comes face to face with the whispering darkness responsible for it all—the king in cobwebs.

It’s only been about a year or so since I started reading David Keck’s The Tales of Durand trilogy but it still feels like I’ve been waiting for years to read this book and find out just how Durand’s story ends. Though I can happily say that this book has been well worth the wait. A King In Cobwebs by David Keck is a fantastic read full of intense action and adventure that I was nearly unable to put it down once I had picked it up. You know a book is good when you almost can’t turn the pages fast enough to find out what happens next, or when you have to backtrack a few paragraphs because you’re afraid you missed something in your hurry.

I’m honestly always a bit surprised when I enjoy a book as grim and dark as A King In Cobwebs can be as I like my fantasy to be a little bit more light-hearted in tone, but David Keck is a great author and you can tell he puts everything he has into writing these books. He managed to create a world that’s dark, bloody, and almost a little too realistic for my tastes and filled it with a cast of characters who really help drive the story in some interesting directions.

One of the things I’ve enjoyed this series as much as I have is Durand Col himself. He’s a fantastic character and probably the perfect protagonist for this sort of series. So I was really happy that in this book we get to delve deeper into who Durand is as a character and what his past is. I feel like we really get to see what Durand can do in this book and what lines he’s willing to cross in an effort to do what he sees as his duty.

The only thing that really bothered me about A King In Cobwebs was a minor plot hole that I just couldn’t manage to forget about as I was reading the book. I don’t want to spoil anything by going into any details on what it was, but happily, it’s a minor thing and didn’t do much to affect how great I found the story to be. I would recommend A King In Cobwebs to anyone looking for something new to read, especially if they are a fan of authors like George R.R. Martin or Mark Lawrence. Although I would definitely recommend reading the first two book in the series otherwise you will be completely lost and not really understand what’s going on.