In May of 1977, the world experienced a shift from which it would never recover. A galaxy far away, and a long time ago, was exposed. Star Wars Episode IV: A New Hope hit movie theaters. A new tribe of people was created: superfans or fanboys or geeks. Whatever you call them, a large majority of them found a point of reference in their life. It filled their conversations. It occupied their free time. It emptied their wallets (or their parents).

I remember that summer. I don’t remember seeing the movie for the first time. I just remember that I kept going back to see it. I also remember it launching me into science fiction. Following Star Wars was Battlestar Galactica, Buck Rogers in the 25th Century, and Star Trek: The Motion Picture. Those movies developed a solid base of love for science fiction from that point forward. The successive Star Wars franchise was always the returning point in my pre-teenage years, though. Empire Strikes Back and Return of the Jedi. Figures, vehicles, accessories, and books were my companions in the transition from weird to geek and finally nerd. 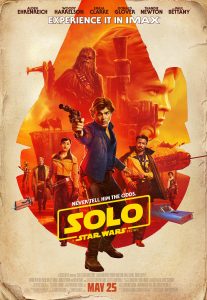 Solo: A Star Wars Story is the latest in that franchise to be released. This is the second inter-quel. The story takes place between the third and fourth episode. It fits into the chronology between Episode III and III.V. It gives us the origin story of everyone’s favorite rogue. As an origin story, it is a lot like my origin story that I presented in the last two paragraphs. It isn’t original. It isn’t flashy. It isn’t even very interesting to some people. But for many people who will go to see this movie, it is warm and familiar.

George Lucas penned Star Wars in large part after being influenced by the samurai films of Akira Kurasawa. Many of the underlying themes of the main plot movies of the franchise have tried to connect with that original influence. Solo doesn’t go East with its influence. It goes West. This feels like western. In particular, this is a western heist movie. This is influenced more by The Great Train Robbery than Seven Samurai. This is about a rogue learning to rise above his humble beginning.

This is also about putting all of the familiar pieces into place. When we arrive at Episode IV, there are certain elements that must be in place. Those elements are alluded to in later movies. For fanboys like myself, we know those elements by heart. When Han gets to the end of this movie, there are things that have to be accomplished. Much like Rogue One, we know what happens. Unlike Rogue One, this story isn’t as original.

We know more about Han than we did the spies in Episode III.V (or is it 3.75?). Those who knew the story knew how that movie had to end. In Solo, we know how the story has to end, but we also kinda had enough pieces to put everything together. Thus enters the vehicle of a heist movie. The vehicle allows this story we think we already know so well to take us on a fun ride through the familiar. Ron Howard does a great job of telling the story. He also does a credible job of taking all of the familiar story points and weaving them into one unified story. It didn’t feel like there were any forced story points.

The actors are hit and miss when it comes to portraying the familiar characters. Alden Ehrenreich has the overwhelming task of capturing Harrison Ford’s lovable space rogue. And misses it in a lot of places. Donald Glover fills the cape as a young Lando Calrissian. He is much more capable at bringing Billy Dee Williams through the portrayal. Finally, Joonas Suotamo steps into the gigantic shows of Peter Mayhew in bringing Chewbacca back to his 190 year old self. You almost forget there is a different person under the hair. Special acknowledgment needs to be given to one of the best screen reprisals: Warwick Davis has a role, and it is always good to see him in a Star Wars movie.

The new characters we are introduced to fit their roles well. Woody Harrelson’s Beckett is the mentor for Han, helping him transition from street rat to outlaw. Emilia Clarke gives Han someone to fight for in Qi’ra. Paul Bettany brings a sufficient amount of smarm for a crime lord. And what kind of Star Wars movie would it be without a quirky droid companion. L3-37, voiced by Phoebe Waller-Bridge, is played as a shadow to Lin Manuel-Miranda’s Alexander Hamilton. Together, they all play well off of, and together, with one another. I feel the weakest of the entire ensemble was L3.

There are twists, turns, giant monsters, blaster fights, space battles, and all of the strokes that make this a Star Wars movie. Even now, the fanboys are raving and ranting about all of the missteps and the plot holes. There will be plenty of flame wars to speak to the details ignored or told incorrectly. And there are ranking conversations happening or timeline discussions on how to view all of the movies in the correct sequence. For me, I would watch it again. It isn’t the best Star Wars movie. It doesn’t belong in the dustbin of the prequels. It isn’t original, but it is fun.