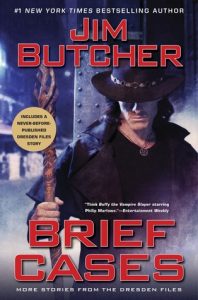 The world of Harry Dresden, Chicago’s only professional wizard, is rife with intrigue–and creatures of all supernatural stripes. And you’ll make their intimate acquaintance as Harry delves into the dark side of truth, justice, and the American way in this must-have short story collection.

From the Wild West to the bleachers at Wrigley Field, humans, zombies, incubi, and even fey royalty appear, ready to blur the line between friend and foe. In the never-before-published “Zoo Day,” Harry treads new ground as a dad, while fan-favorite characters Molly Carpenter, his onetime apprentice, White Council Warden Anastasia Luccio, and even Bigfoot stalk through the pages of more classic tales.

With twelve stories in all, Brief Cases offers both longtime fans and first-time readers tantalizing glimpses into Harry’s funny, gritty, and unforgettable realm, whetting their appetites for more to come from the wizard with a heart of gold.

While there are a lot of books that I’m looking forward to reading this year, I can easily say that Jim Butcher’s Dresden Files short story collection Brief Cases is probably the one I was most excited to see release. I’m honestly not that big a fan of short fiction because it often feels like the story ends as soon as I’m finally starting to get into it, but I’m always happy to read anything by Jim Butcher. Even though I’ve read most of the short stories in Brief Cases multiple times, I was still sucked into this collection the moment I opened the cover and I only stopped reading when I got too exhausted to stay up anymore.

One of my favorite things about the Dresden Files is how much lore and mythology Butcher has used or created over the course of his books, and how detailed and believable he has made this hidden supernatural world. One of the best parts of Brief Cases is how it really helps flesh out parts of Harry’s world that we may not get to see in the main books of the series. We also get a number of stories told from the point of view of characters other than Harry which always adds an interesting aspect to the stories for me. I mean, I love Harry’s stories the most by far, but who doesn’t want to see Luccio fighting warlocks in the wild west or witness Waldo Butters experience his first day on his new job?

We get both of those stories and so many more in Brief Cases that it’s almost impossible to pick out just which stories were the best from the collection. We may not get to see Harry grow as much as a character in these short stories as we do in something like Skin Game, but we do get to see aspects of his life that we might normally only hear about. That helps show us what kind of person he is at the time. Whether he’s training a group of young Wardens or helping watch over Bigfoot’s son, I think every story in this anthology really tells us something about Harry as a person that we didn’t know before. It’s rare for me to like a collection this much, but I would honestly rate both Brief Cases and Side Jobs as two of my favorite books in the entire series.

Now, I don’t want to spoil anything for anyone, so I won’t go into many details. However, I will say that while all the stories in this anthology are fantastic, it’s the new story,  Zoo Day, that really stands out the most. In Skin Game we got our first real introduction to Maggie and from the moment she was introduced I knew I wanted to see her much more often in the series. So it’s pretty awesome to not only get another story featuring her, but for it to be told from the POV of her, Harry, and Mouse. If Zoo Day is anything to go by, then she is going to be a great character and a fantastic addition to the series and I really hope we see her in more short stories or even in a spin-off series of her own. I mean, I can totally see her and Mouse solving mysteries together like they were a two-person version of the Scooby gang.