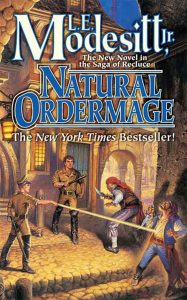 L. E. Modesitt, Jr. begins a new Recluce story in The Natural Ordermage, the first of two volumes set mostly on the continent of Hamor, far across the sea from Recluce where the story begins, a new setting for this series that fans will be eager to explore.

Rahl, a young apprentice scrivener on the island of Recluce, likes life to work out in his favor. To make sure things go his way, he uses a small amount of order magic in opportunistic moments, but his abilities are starting to get the attention of the Council magisters. He’s not like other ordermages, the same rules don’t seem to apply to his magic. And he has a bad attitude too. It gets him sent to the mages’ training school for testing, and then banishment to Hamor, where his learning continues under dangerous circumstances.

During Rahl’s exile in Hamor, working in the Ordermage Council’s import and export business, his powers increase–and so does the amount of trouble he can get into. Welcome the the fantasy world of L. E. Modesitt, where the adventure is just beginning.

It’s been around 15 years now since I first stumbled across the Saga of Recluce series by L.E. Modesitt Jr. while browsing for something to read at the library, and despite the fact that I’ve probably read all of the books a half a dozen times or more over the years, I still seem to enjoy them more and more with every reread. Normally I would struggle to name my favorite book in such a long series but since the day I first picked it up, I’ve always felt like Natural Ordermage was by far the best book in the Saga of Recluce. No matter how many times I reread it keeps me up late into the night every time I start it anew.

There are plenty of reasons why I think Natural Ordermage is the best book in this series but I think the one thing that has always stood out the most for me in this book is how we get to see that order and chaos isn’t as black and white as the Masters of Recluce would like everyone to believe. In Natural Ordermage we get to see Ordermasters who should be examples of how to live an honorable life instead use their abilities for personal gain and for petty little power plays against people they fear or dislike. While at the same time we get to see Chaosmages use their abilities it an attempt to better serve the people and rulers of their country. I also love the fact that we get a much deeper look into Hamor in this book than we have in any other book in the series so far, and every time I read this book I can’t help but feel like Recluce could learn a thing or two from them on how to handle their mages.

One of the things that has always surprised me about this book though is how much I actually like Rah as a character because when it really comes down to it, He’s just not that likable of a person. He likes to blame everyone and everything else for his problems and for most of the book has no real sense of self-accountability. So watching him get knocked down and shown over and over again that most of his problems can and should be laid at his own feet is one of the more interesting parts of the book. I personally think Rahl is one of the more interesting characters from the entire Saga of Recluce and think he matures and grows more than any other character in the series.

The only thing that ever really bothers me about Natural Ordermage is the same thing that tends to get bother me in every single Recluce book and that is just how overly detailed it can get at times. It wouldn’t be so bad if it was something interesting that got a little too detailed, but it always tends to be things like how many times a character chews their food, or how many steps they take to get from one room to another. I don’t really need to know how many times Rahl chews his food before he swallows or exactly how many steps he takes to get to the front gate to lock it, or how many back. Happily, though that doesn’t really take away much from how much I enjoy this book or the series, it’s just kind of something you have to get used to when reading these books.

It’s probably been a couple years since the last time I read this book but I can honestly say that I enjoyed reading it as much now as I ever have, if not more. The Saga of Recluce is a series that I think anyone would enjoy and one of the best things about it is you don’t have to read it in any specific order if you don’t want to, as long as you ready any given duology or trilogy together as you get to them. Though I always suggest people read them in chronological order if they are going to start from the beggining, I personally think it makes for a much more enjoyable read.

I also want to take a moment and talk about the fact that Tor is re-releasing the first three book in the series later this year with some fantastic new cover art by the amazing Marc Simonetti. On their own these covers are just amazing but one of the best things about them is if you put them all together then you get the amazing triptych seen above. I already own both the physical and audio copies of all three of these books but I already know I’m not going to be able to resist buying them again for this beautiful art.