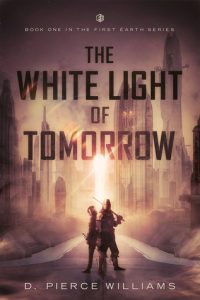 In a future dominated by the Church and defended by the sword, one piece of forbidden technology may change all the rules.

Adrian of Tarsus is a veteran Knight Hospitaler. His adopted daughter, Mariel, serves as his squire, and together they travel the galaxy aboard the ancient merchant ship Miranda. Adrian uses his position as a Church enforcer to provide cover for his real quest: a cure for Mariel’s mysterious and painful illness, which worsens every day.

Trouble is, Adrian’s certain the cure requires Machina Infernus, heretical technology forbidden by the Church, and not even a Knight can hide from the Holy Office of the Universal Inquisition.

When the Miranda’s crew are ambushed while acquiring such an object, Adrian turns to Sabine Adler, an old flame and specialist in Machina, for help.

But once on the planet Bethany, Sabine’s home and the seat of Christendom, assassins come out of the woodwork and everyone seems to want Adrian’s relic –mercenaries, cultists, thugs, politicians, even the Inquisition. Most troubling of all are a pair of unusual nuns who claim to know the location of the lab where the relic originated, and the fact that one of them bears a striking resemblance to Mariel.

Adrian has survived galactic crusades, skilled assassins, and Church politics, but these women may be the death of him.

The White Light of Tomorrow by D. Pierce Williams was an action-packed and fast-paced read that I was unable to put down from beginning to end. I was actually a little bit hesitant to start reading this book when I received my copy in the mail a few weeks ago as I had just gotten off a run of self-published books that I just didn’t think was any good. I absolutely loved it once I started reading it however and think it’s a great example of why people should never judge a book before they read it just because it’s self-published. There are some fantastic self-published books out there and this is definitely one of them.

I thought The White Light of Tomorrow was a well-written book with a fascinating plot and a pair of main characters that it was easy to believe in and cheer for. While I could probably list 10 things I enjoyed about this book off the top of my head I’m going to just focus on the two things that really stood out to me. First is the fact that I thought this was probably one of the fastest paced books I’ve  read in a long time that didn’t leave me utterly confused by how fast everything happens. The story manages to suck you in almost instantly and you move from scene to scene and fight to fight so fast the story just seems to fly by. Second would be the interesting way that I thought D. Pierce Williams managed to take what should be two completely opposite genres and combine them into one seamless story. I can’t think of any dystopian science fiction books I’ve enjoyed more than this one.

Though as much as I liked this book there were a few things that bothered me and made it a bit hard to enjoy the story as much as I should have a time or two. Religion plays way too large a role in the story for my liking — I know this is done on purpose and is an important part of the story but I can’t help but think the story would be a bit better if we had learned a bit more about the world and the characters and a little bit less about the religion. I also don’t think anyone other than the two protagonists really stood out as anything special. I actually couldn’t name any of their names or tell you anything about anyone besides Adrian and his daughter. I am hopeful however that we will see the rest of the characters grow and become a bit more fleshed out as the series progresses.

While everyone will probably enjoy reading The White Light of Tomorrow, I think it would be of special interest anyone who read Sci-Fi or Dystopian fiction. I will definitely be reading the next book in this series and I think D. Pierce Williams is going to be an author worth following.