This book is a sequel to Princess Academy, which I reviewed here. As such, this review might contain spoilers. 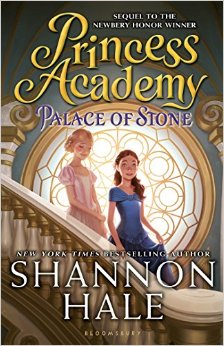 When Miri and a few of the girls from Mount Eskel’s princess academy travel to the capital to help the princess-to-be get ready for her wedding, they have no idea what to expect. Some are worried about leaving their beloved mountain for the first time, others are thrilled about going to the big city, and Miri is mostly just happy to see her best friend.

But not everything in Asland is as perfect as the mountain girls hoped. As Miri learns more about her new home, she finds herself deep in the middle of an upheaval that affects everyone she loves. Torn between her loyalty to the princess new friends’ daring ideas, and between an old love and a new crush, Miri must test the strengths and skills she gained in the princess academy.

Master storyteller Shannon Hale’s newest book celebrates the joys of friendship, the thrills of romance, and the fate of a beloved fairy-tale kingdom.

When I read the first Princess Academy, I was surprised to find I actually really liked it. The characters, and the themes running through it, were surprisingly strong, enjoyable, and relateable. Normally when I like a book I’m happy to pick up the sequels; this one made me debate it. After all, Princess Academy was pretty self-contained. What could I expect from the sequel? Was it truly an unnecessary one, perhaps encouraged into existence by publishers who thought they could make more money? Would it build on the themes of the original? Would it have new themes running through it? Or would it not have an over-arching theme, and instead just be an enjoyable story, perhaps not living up to the original?

I must say that, once again, I was pleasantly surprised.

A few of the situations Miri finds herself in are similar to the first book; being a fish-out-of-water because her mountain town is a backwater province, for instance. Instead of merely re-hashing old scenarios, however, Hale puts them in a different context; Miri doesn’t realise the scale of things, or has trouble coming to terms with how the courtiers see her and the other mountain girls, or finds herself in a situation that would never have arisen  back home and which she has no way to prepare for. It served both to show how far Miri had come since the beginning of the first book and how far she still had to go, and the character development that happens as Miri learns to deal with these problems is interesting to read.

The book had a darker plot and setting than the first book, with the very real possibility people could get killed and talks of bloody revolutions and anarchy. While things can seem desolate at times and not everyone earns a happy ending, the book has an overall hopeful tone and everything works out very well, all things considered.

The book continued some of the same themes as the original; Miri spends a lot of it figuring out where she belongs and what place her mountain town has in the kingdom. It had a new overarching theme, though, which prevented it from being merely a rehashing of the original: choice, and realising that sometimes a third option is preferable to the dichotomy we’re presented with. Miri undergoes significant character development during the book thanks to both of these themes, which is quite nice; I was worried that the character development in the last novel would be considered “enough”, and Miri wouldn’t grow further; it’s also nice Miri’s character development wasn’t reset only so she could learn the same lessons over again. There was a good balance between revisiting old themes and covering new ones, which served both to tie Palace of Stone in with the first novel and at the same time make it a distinct sequel.

For those who liked the first book, this one is worth checking out. It’s a sequel that lived up to the original, and which was just plain fun to read. The politics in it might go slightly over a younger person’s head and might not interest everyone, but I felt they were handled fairly well (given that I’m about as political as mud). Overall, it was one of the few sequels that exceeded my expectations.