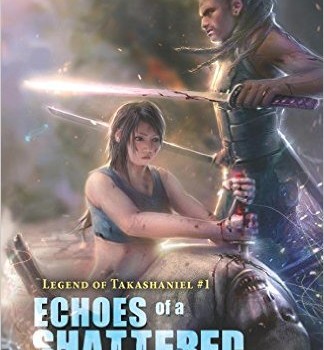 In the lower planes of the abyss, a large gray demon was devouring a smaller fiend. It raised its massive, horned head at a distant call. The call was coming from one of the higher planes, but the thing had never heard of such power coming from there. The rage cause from hearing its name gave way to curiosity, and thus Kabriza heeded the call.

R. J. Terrell started off as an indie author who recently signed on with WordFire press and is currently in the process of re-releasing his backlist under that imprint (Be looking for an interview with him on that subject in the near future). I thought I’d pick up the first of his books, Echoes of a Shattered Age, the first book in the Legends of the Takashaniel series.

The story opens with a sorcerer as he prepares to summon a demon so powerful, the sorcerer practically had to invent a new kind of magic to be able to contain it. From there, we dive into a world where technology has long ago failed. People have adapted to a new way of life. In distant parts of the world, a rare few people sense the coming the demon, and they begin to gather, summoned to the Takashaniel, a mysterious tower needed to maintain balance in the world.

R. J. Terrell immerses the reader in the world that earth became after the Age of Technology. Old things reemerge as they battle side by side with centaurs, and new and strange things are discovered that mankind has never dreamed of. The heroes must not only fight to defend the Takashaniel, but they have strive to fulfill their own potential and transcend the limits of humanity in order to defeat creatures that even evil things fear.

Echoes of a Shattered Age starts off slow, but once it hits is stride, it really pulls you along. There are a few places where I thought it dragged on just a little too long. In spite of that, Echoes tells a sweeping tale that sets the stage for an even bigger story in future volumes. It reveal just enough of the world to make me want more, and I’m looking forward to seeing where else this story takes me.