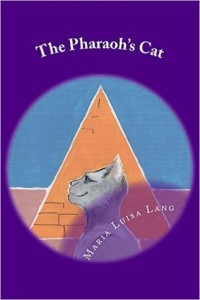 The Pharaoh’s Cat, narrated in the present tense by the cat himself, is the story of a free-spirited, quick-witted stray in ancient Egypt who suddenly finds himself with human powers joined to his feline nature.

The cat immediately captures the attention of the seventeen-year-old Pharaoh, making him laugh for the first time since his parents’ death, and is brought to live with him at the royal palace.

The cat also becomes friends with the High Priest of the god Amun-Ra and seeks his help in solving the mystery of his human powers and the supernatural manifestations that later plague him. He has an enemy in the Vizier—the Pharaoh’s uncle and the second most powerful man in Egypt. The Vizier hates him for himself and even more for his relationship with the Pharaoh.

The cat participates in festivities at the royal palace, developing an insatiable appetite for good food, wine, and gossip. He later accompanies the Pharaoh on a trip through his kingdom, all the while renewing the Pharaoh’s ability to enjoy life and inspiring him to become a stronger leader.

Anyone who knows me knows how much I love cats, so it probably shouldn’t be a surprise that I found Maria Luisa Lang’s The Pharaoh’s Cat to be a charming and entertaining story. It’s not often you find a book told from the point of view of an animal that isn’t aimed at children, and the few I have found over the years quickly lost their charm. The Pharaoh’s Cat didn’t however, I loved and laughed from beginning to end. Wrappa-Hamen is exactly how I picture every bipedal talking cat in ancient Egypt.

Normally this isn’t the type of book I would read, but I had to know exactly what a cat in ancient Egypt could get up to. Apparently, it’s a lot. The adventure never seems to stop for Wrappa-Hamen and the young Pharaoh he meets and drags along behind him the entire time. It is through Wrappa-Hamen that the young Pharaoh learns to laugh again, all while becoming the leader his people deserve.

While I enjoyed this story quite a bit, and it really did have me laughing throughout the entire book, there were a couple things that disappointed me. First and foremost was that the story was so light on Egyptian Mythology, if I’m reading about ancient Egypt I usually like to see a bit more of it. The only other thing I could complain about would be the length — I wish it had been longer, though to be honest, I wish this about any book I read, no matter the length

I will definitely read this book again, and will be keeping an eye on this author in the future, she can only get better!