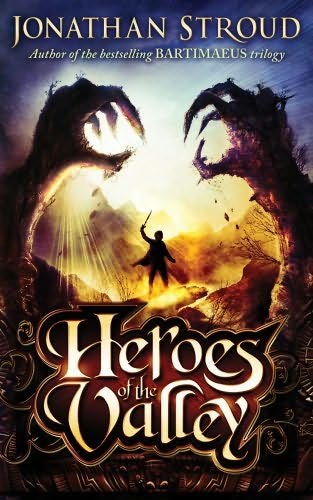 Halli Sveinsson has grown up in the House of Svein, hearing the legends of the heroes as all his forefathers did. But in this now-peaceful society, Halli has always been a misfit. Stumpy and swarthy, with an aptitude for practical jokes, Halli livens his days by getting into trouble.

But when he plays a trick on Ragnar of the House of Hakon, he goes too far, setting in motion a chain of events that will forever alter his destiny. Because of it, Halli must go on a hero’s quest that will bring him head-to-head with highway robbers, terrifying monsters, and a girl who may be as fearless as he is. Along the way he will discover the truth about the legends, his family, and himself.

Heroes of the Valley is the sort of book that doesn’t really come together until the very end. Before that, many of the major events in the book seemed disconnected from each other and some seemed like they would have no relevance on the plot at all. It was satisfying to see it all come together in what was, I must say, a very spooky climax.

Halli is a typical fourteen-year-old boy: he acts without thinking, puts his foot in his mouth with every other sentence, and often makes rash decisions. I wasn’t entirely sure how much I liked him as a character. He wasn’t quite as interesting as Aud, the female lead, who’s refreshingly sensible, daring, and snarky. If Halli was merely a harmless prankster, he’d be a bit more endearing, but he leaves tame pranks behind early in the novel and starts pulling stunts that are actually dangerous; the “trick” he plays on Ragnar mentioned in the description involves poisoning him and his friends in a way which could easily have been deadly and could have lost the House of Svein everything; Halli’s very lucky Ragnar only ended up sick for two days. By the midway point, Halli is indirectly responsible for the death of a very important person and at the end is directly responsible for the deaths of six more people (though to be fair, they were trying to kill him and his family at the time). He did, however, have realistic flaws and foibles, and gets some character development at the end.

As I mentioned above, the ending is where it all came together into a good, satisfying story. Though the book was good throughout, the ending united everything and made many things I was not too fond of from the rest of the book much better in hindsight. Some questions I had were left unanswered, but that’s more due to the nature of the story, and they were minor things that probably nobody but me cares about. It’s at the end that Halli has to really come to terms with himself and everything he’s been told his whole life, and gets character development doing it. It’s exciting, creepy, and satisfying when it does end.

That said, I did feel the ending ignored some things that makes it a little less happy, like how the valley is left with a political mess on its hands (never said in the book, but it’s obvious from how it plays out, with one major House ruined and another left without an heir). The ending also implies that, despite everything Halli did, nothing really changed in the valley, which for me takes some of the wonder out of Halli’s achievements. Again, though, I’m probably over-thinking that last bit. The book in general tended to treat injuries a bit too lightly, with characters able to walk fairly well on injured legs and even run and jump, and people so sick their breath comes as a slow rattle able to engage in strenuous fighting; this inhuman resistance to disease and injury is probably why Ragnar didn’t die from the poisoning he got. It takes some of the drama out of a character’s wounded knee when they can still climb walls and leap to safety with little more than a few stabs of pain.

All in all, it’s a nice read with a nice story and an exciting climax. Yes, sometimes you’ll want to give Halli a swat to the head, but Aud does that often enough, so it’s all good. It’s good for a light read or to take on a holiday.